Any hit song from "kalikAlam" in TN?

Many hit songs from that album for the Murali-Revathy movie.

Of course, that "mAnamuLLa poNNu" song was such a big smule hit when a group of people published it (one of the singers, Muthu, was then my co-worker / lunch buddy) - it ran viral everywhere in social media!

#1479 mayilAdum thOppil mAnAdakkaNdEn (SJ-SPB duet, chinnappasanga nAnga)
What a lovely song! I remember being chastised by a number of people for not including this song in the IR-SPB thread at mayyam when I wasn't familiar with this song

I'm not sure if the next album "chinnavar" were a super hit in TN (and thus not needing a poll). However, I was not familiar until the internet era of most songs of this album. andhiyilE vAnam was always known to me but not others. So, I need to get reassurance from others...

Andhiyila vaanam was probably the first IR song carrying a promotion before the release and he did NOT disappoint when the audio released.  The song became more than just a superhit.  So, it is funny when YSR fans say that Super Deluxe helped it gain views! (same is the case with Per vechaalum).

There was this DD program on 1991 deepAvaLi about IR - my friend / co-worker recorded it in his VCR for me and showed it (knowing my affection for IR and his music). In that program they showed a small bit of "andhiyilE vANam" recording which I still remember

Let us add the hit songs of chinnavar to this list.

#1488 gundooru gongurA (KSC-Mano duet, chinnavar)
Another fun song, with a lot of energy and zest!

Being a dubbed movie, it was not known in TN, but a chartbuster album with evergreen superhits in AP (Telugu).

Passing yet another dubbed album.

Let the TN-ers decide which were hits in the home state when it arrived!

Passing yet another dubbed album.

Really?!  ALL the songs are superhits except the title song.  The album is one of my personal favorites.

Also, the way Valli valli ena vandhaan has been picturized by R. V. Udayakumar, deserves a special mention and a good round of applause.  One of the BEST picturized songs of IR, with ravishing Revathi and charming Karthik - an excellent on-screen pair.

#1488 vaLLi vaLLi ena vandhAn vadivElan thAn (SJ-IR duet, there is a SJ-PJ version too, deiva vAkku)
Lovely song with a terrific rhythm arrangement. One of the rare cases of me seeing the video before listening to the audio (on one of those "Indian store" DVDs)

#1482 indha ammanukku Eththa ooru (IR with chorus, deiva vAkku)
Both composing and execution of this song shouldn't have taken a lot of time for IR - enjoyable one though there had been so many like this in his career

Moving on to the next poll - dharma bhoomi - no song plays in my mind when I read the names, will have to listen

Dharma Bhoomi is the Tamil dub of Aswamedham. I dont think any song became a hit in Tamil

So, this is another Telugu dubbing album that did not create much waves in TN

So, we need to pass that "dharma bhoomi" dubbing album.

Also, seeing how this thread is going, Anbu sir looked at the next album in his spreadsheet and messaged me stating that "eeshwar" album is also Telugu dubbing.

It has these songs: (Name of Telugu original - killer - starring Nagarjuna / Nagma)

And none of these songs were popular in TN. So, this album also has to be passed.

Next album is ejamAn - obviously does not need a poll - blockbuster album. Let me add all the songs to our list :

#1493 ejamAn kAladi maNNeduththu (MV with chorus, ejamAn)
Title song and very popular - not one of my favorites (actually the pAdal varigaL irritate me like anything)

#1500 adi rAkku muthtu rAkku (SPB with chorus, ejamAn)
Used to me my favorite of the album - fantastic rhythm arrangements and a nice twist in the end. (Of late I get irritated with the "koozhu ooththidanum" line and do not like playing it much).

Unintended, still a favorite song made it to the special #1500 spot

Yes, Dharma boomi and Eeshwar are unfamiliar in TN.

En Iniya Pon Nilaave songs probably came out a whole decade earlier than the movie!  Still, none of the songs were even Tier-3 hits.  Also, it is an album co-composed by IR and MSV.

BC wrote:
En Iniya Pon Nilaave songs probably came out a whole decade earlier than the movie!  Still, none of the songs were even Tier-3 hits.  Also, it is an album co-composed by IR and MSV.

Per the information I received from Anbu sir, this was NOT like MTK (i.e. IR and MSV weren't sitting and composing together for this album).

That way, 2 songs originally composed by IR got included in the movie when it finally got released in 2001. (thaLirgaLil pookkaL / kAdhal ninaivE, both by KJY). The other two were not part of the movie. However, they were part of the cassette / disk released in 1992.

I've done some earlier research on that R Pandiyarajan - Mounika movie and documented many details in this thread:
https://ilayaraja.forumms.net/t212-albums-with-partial-credit-for-ir-like-sangarlal-kannil-theriyum-kadhaigal-en-iniya-pon-nilave

Obviously, this was a hodge-podge effort / product and one is not sure how much of actual involvement by BM himself (or director Bala). In any case, no direct association of IR in either the year 1992 (album release) or 2001 (movie release). They have credited him properly, however: 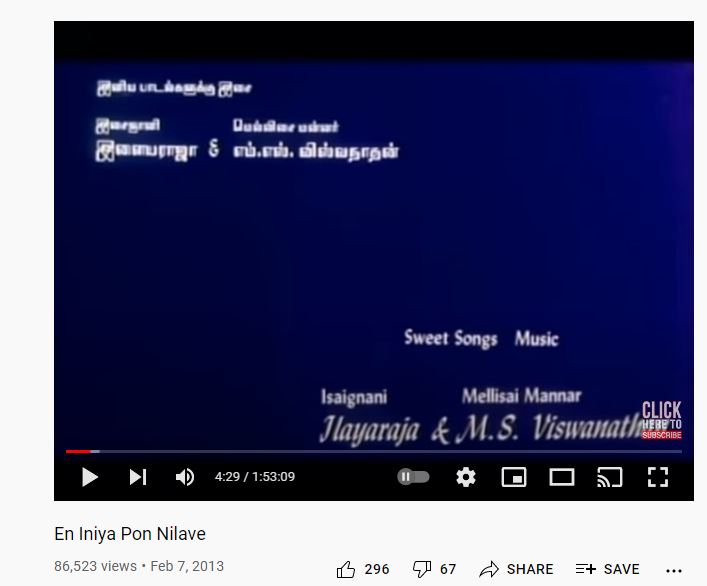 The "re-recording / OST / BGM" was neither IR nor MSV - it was one Harischandra: 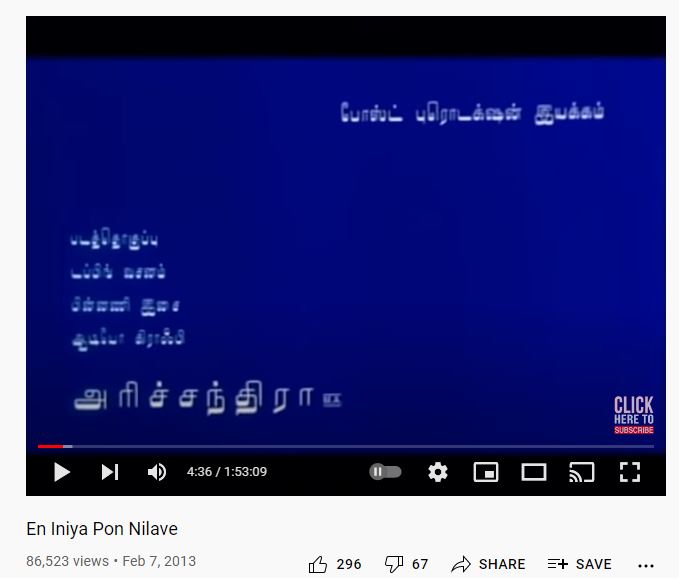 With that movie issue cleared up, let us get back to our 4 songs

As the lyricist is Vairamuthu, these could not have been "recorded" in 1992 - no way. So, IR had recorded them - all 4 - many years before. The sounds strongly indicate 1980 or 1981 when we listen to the two songs that are present on youtube. Now, here's where Anbu sir's latest communication to me becomes very very special and throws more light

Let me get the details as a list, for clarity:

1. Anbu sir heard from an old-timer that BM started this "en iniya pon nilAvE" movie project immediately after moodupani, with Shobha in the lead. (Possibly 1980-81). That was when the four songs got recorded with VM as lyricist. (I also had the privilege yesterday to listen to all the 4 songs from Anbu sir's personal collection and the SJ song "pozhu pOchchu vAnga" has the EXACT SAME TUNE of another song by UR "kulungi kulungi iLamai sirikkudhu" for a Rama Narayan film. (kaNNE rAdhA). "pozhudhu pOchchu" song was possibly IR's first song with SJ's "mukkal-munagal" and predates ponmEni urugudhE

The other JC song is soothing as well!)

2. Shobha had untimely death and BM could not continue the project. Meanwhile got the "moonRam piRai" project and became very busy thru out 80's with multiple hits. The songs recorded were in "spools" (just one tune got reused for that kaNNE rAdhA movie and we've covered that in Uma Ramanan thread).

3. BM started the project again in 1991 or 1992 with R Pandiarajan / Mounika and this time got some songs from MSV (could not understand why, may be Vairamuthu benefit match). Whatever it was, the album got released in 1992 by Pyramid with all 7 songs. 4 by IR and 3 by MSV. They composed / recorded them independently and not working together, as mentioned before.

4. However, the movie had to wait for another decade to get released. That too with a third person doing BGM. At that point of time, two of IR's songs weren't included on screen.

Well, unfortunately, none of those 4 songs became popular and we need to leave them out in this thread's listing.

Having completed that detailed post, let us move on to the next album - enRum anbudan - and it needs a poll.

As there are mixed opinions about "manjal veyil", we need to leave it out of the list.  Nice song, though!

Moving on to the next album, enga thambi - couple of songs are familiar (mAnE maragathamE / malaiyOram mAnguruvi) - let us find out from TN-ers how this album fared in public:

ALL the songs were superhits; heard several times on Radio (all channels) and TV.

Here is the jukebox:

Many twitters picked 3 songs from the enga thambi album (and I was also familiar with all those 3) but the uchchi malai song appears to be popular as well, going by comments everywhere (including the ones on YT)...so, adding 4 songs from this album (which I found to be another Sathya movies production).

#1503 antha uchchi malai kAtRaikkELu (Mano solo, enga thambi)
1st time listen for me, sounds average - but not surprising that it was well received at that time.

#1505 mAnodu mayilAdum kAdu (UR-Arunmozhi duet, enga thambi)
Got covered in the UR thread and quite a sweet number!

#1506 malaiyOram mAnguruvi (Minmini-Mano duet, enga thambi)
Fantastic song - obviously best in the album IMO - what a lovely composition this one is! I've also observed that this is a close cousin of "nenjukkuLLe innArunnu" of ponnumaNi - another album from the same year with both movies getting released in April 1993 - not sure which got recorded first (or whether both got recorded on the same day

Moving on to the next album - which also needs a poll, as I have not heard ALL of them during my Koval trips those days - Ezhai jAthi.

Never heard the SPB version of "Indha veedu namakku" until recently.  Barring that song and Yezhai jaadhi, the rest were superhits.

The movie was promoted with the shooting-spot snippets of Adho andha nadhiyoram song.  So, that song was more than "superhit".  It was hard to see Jayapradha in this movie.  She should not have accepted this movie offer, IMHO.

#1507 adhO andha nathiyOram (SJ with chorus, Ezhai jAthi)
Fabulous song - this was also part of that 1991 deepAvaLi doordarshan program - was it Prabhu Deva (or his dad or brother) who show cased how this song was being shot...

#1508 intha veedu namakku sonthamillE (Two solo versions - IR and SPB, Ezhai jAthi)
Another nice song and I got this one included in the IR-SPB thread during tfmpage days

#1509 koduththAlum koduththAndA (Mano with chorus, Ezhai jAthi)
Not a very impressive song IMHO, never heard before either - but TNers confirm this was a hit, possibly because of Vijayakanth and his political ambitions.

Adding a poll for the next albm - "innisai mazhai" - possibly a couple of songs were hits in this.