Any TN hits from "rAman adbullA"?

app_engine wrote:Though it is a very rare case, this happened to be one IR album for Panju sir which didn't go very well in TN - no hits.

Of course, IR himself is fond of the acapella (nAn poRandhu vandhadhu rAja vamsaththula) but the album apparently didn't make a sensation in TN

Pass... but let us do an honorable mention of that "concert-hit" song


Next one to be in the poll is for "makkaL Atchi"

Not only the Naan Porandhu Vandhadhu song....I love all the songs in this movie esp. Adada, Oru oorile songs as well....  Disappointed the songs were not a hit in TN

Adding one song from makkaL Atchi - though other songs sound nice, they didn't become popular due to the competition I think!

#1754 mEluru mAman (KSC with chorus, makkaL Atchi)
Typical IR-only-possible dance song! Had it come a decade earlier, it should have been a trend-setter

Moving on to the next album, which definitely had hit songs (I remember seeing it in Sun TV count downs those days) - nAttuppuRappAttu

So, nAttuppuRappAttu had at least 3 super hit numbers in TN.

The album seems to be moderately popular on YT as well :

#1755 otha roobA thAREn ( Devi / Arunmozhi, nAttuppuRappAttu)
Listening to this song after a long time reminds me that this should go to the "interlude repeat" thread

Moving on to the next album, needs a poll - pAttu vAththiyAr - album full of KJY songs - don't know how the songs fared in TN :

Looks like pAttu vAthiyAr had one super hit melody (nee thAnE - 2 versions). Other songs didn't make it big in TN.

#1758 nee thAnE nAL thORum (SL - KJY duet / SL solo, two versions, pAttu vAththiyAr)
What a lovely melody and superb singing! (Unfortunately, at this time period, there was risk of the song being identified with S A Rajkumar as he had many hit songs in the same style or rAgam

Based on inputs from multiple tweets, including one song from periya kudumbam (though the album is unfamiliar to me).

#1759 thaththi thaththi thAvidum (KSC-SPB with chorus, periya kudumbam)
Nice melody - but the arrangements, especially rhythm, are of the phase that I'm not a big fan of

Moving on to the next album, that needs a poll as well - rAja enga rAjA (never heard of it before)

No hits from 'rAjA enga rAjA' - so let us pass.

Next album also has a "rAjA" in title

Yet another album not familiar to me.

Adding 2 songs from rAjAvin pArvaiyilE that have over half a million hits on YT (and also based on views from TN-ers based on their TV channel memories),

Both can only be termed "hits" (and not super hits)

#1761 ivaL yArO (SJ-Arunmozhi duet, rAjAvin pArvaiyilE)
Nice melody and enjoyable song - though I would have categorized this as a "non-IR" song those days, if it got played in a bus

Moving on to the next album, which definitely had a couple of very popular songs (possibly because of the then high popularity of Prabhu Deva) - rAsaiyyA

#1762 masthAnA masthAnA (Bavadharini / Arunmozhi / SNS, rAsaiyyA)
Sweet song with the innocent yet distinctly identifiable voice of IR's daughter. Not a fan of some unnecessary sounds / yells here and there but overall catchy song!

#1763 kAdhal vAnilE kAdhal vAnilE (Preethi Uttamsingh / SPB duet, rAsaiyyA)
Another sweet number with enjoyable arrangements. Catchy and all but somehow the song didn't earn a place in the heart (as in the case of many SPB duets, some artificiality felt and didn't age well over the years)

Some have said "dhindukkallu" song was a hit - but since others have reservations, not including it. The song is a personal favorite - especially the choral arrangements are awesome!

Moving on to the next album, which was a smash hit in Malayalam - some of the Tamil dubbed songs were hits I think, let us ask TN-ers - "siRaichchAlai" :

Adding the 4 hit songs from siRaichAlai to the thread's list:

#1767 mannan kooraichchElai (KSC solo with GA in interlude, siRaichAlai)
I think IR did the interlude folk part in Malayalam and that song was a super hit in Kerala when the movie arrived - not a single day passed then without listening to this song involuntarily from somewhere or other!

Moving on to the next album, that needs a poll - thEdi vandha rAsA

The last album from this year as per Anbu sir's spreadsheet is "rAja muththirai" and it has 2 songs listed, Let us find out from TN-ers if they heard them.

R K Selvamani was the director of the movie it seems.

There were no hits from "rAja muththirai".

Let me compile the stats and then start the next year

Statistics screenshot - from the hits spreadsheet, at the end of 1995 : 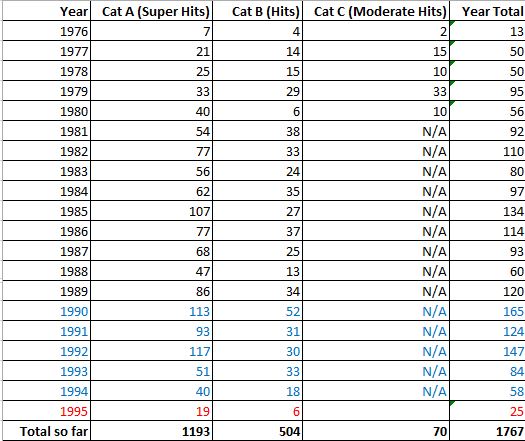 1995 is the lowest in many many years

Anbu sir's spreadsheet lists only 6 albums for the year 1996

Perhaps IR was doing more in other languages than in TFM at this time. Well, let us get them all polled and documented ASAP.

First album to in poll for this year is "irattai rOjA" :

While the earlier movie of director Keyar with IR had terrific / awesome songs (eeramAna rOjAvE), the irattai rOjA did not seem to enjoy the same popularity.

What is worse, I've not even heard any of the songs

After checking with TN-ers, adding 2 songs to the list (possibly hits because of TV time - not my personal preference after the first listen

) and nothing extraordinary IMHO

Moving on to the next album, kattappanjAyAthu - needs a poll - personally I remember the Kovai AIR station often playing the Bavadharini song those days!

Adding 2 songs from katta panchAyAthu - based on feedback as well as YT stats :

#1770 oru chinna maNikkuyilu sindhu padikkudhadi (Bavadharini / Jolly Abraham, kattappanjAyaththu)
Sweet melody and enjoyable song! Possibly the first song for Jolly Abraham with IR, not sure if this or the mAyA bazAr song got recorded first - but this was popular unlike the other (even though he was singing from late 70's or early 80's, malairANi mundhAni for MSV / reenA meenA for T Rajendar etc)


#1771 vENdinA vENdum varam (Devi / Arunmozhi, kattappanjAyaththu)
Heard today for the first time (I mean consciously) and just an average number. However, has million plus views and also got vetted by TN-ers.

Next poll is for "poomaNi" - this album had some super hit songs IIRC :

3 hits from poomaNi, as confirmed by many TN-ers (me myself used to hear two songs frequently on CBE radio)...

#1773 sAmy koduththa varam (2 versions, SPB, poomaNi)
I don't think this got included in my IR-SPB series on mayyam. Possibly not known to me at that time, nice song!

#1774 thOL mEla thOL mEla (Sujatha-IR duet, poomaNi)
Song that played regularly on radio - I think this was a patti-thotti hit as well.

I remember listening to the "poovukkoru arasan" song frequently those days, with that lovely flute bit. Let us see what TN-ers say about this album :

Looks like poovarasan had 2 hits in TN, as per people who lived there in those times.

Surprisingly one song that I was familiar with (pottu vachcha kiLiyE) does not feature in their list - even though I've captured in the IR-SPB thread. Well, let me leave that out for this thread

#1776 intha poovukkoru arasan poovarasan (KSC-SPB duet, poovarsan)
Very sweet song and listened to this many times on radio those days. Looks like this had a wide reach!

Next album on poll is "rAman abdullA" - for a Balu Mahendra movie IIRC. 'En veettu jannal" was the song I was familiar with those days (having listened to it in a Palakkad saloon).