Spent some time this week trying to dig the web to get details of the BM movie "en iniya pon nilAvE" thanks to a twitter conversation with DM & fring.

Don't want to lose the findings buried among 1000's of tweets but to save in a forum thread. (Which is why opening this thread).

This place will also clear any confusions created by incorrect info that is typical on the web on certain albums, like the ones mentioned in the thread title.

That way, anyone who wants to VERIFY info on IR albums need not search around the web but visit this one-stop-shop

To make things even more clear, those rare albums like 'mellath thiRandhadhu kadhavu' WILL NOT belong here.

Those few were true cases of "joint-isai" efforts, where IR and MSV sat together and composed. Based on some TV interviews, even in such albums, MSV did only the melody part for songs, with IR doing most or complete orch for songs and BGM. Regardless, they are to be definitely credited as "iNaindhu isai amaiththa" albums.

So, we won't talk about them in this thread.

This thread is only for movies / albums where IR did just one or more songs (but those songs themselves were 100% IR) while other MDs did rest of the songs / movie BGM etc.

Kattumarakaran  - songs - IR  and RR was by deva  - unconfirmed

Rajavin Parvaiyile and Naattupura Paattu had songs composed by Raaja and RR was IR for some scenes and Arunmozhi (Napoleon), uncredited, for the remaining portions iirc. Napoleon spoke about this in one interview too.

Aathma, Ninaikkindra Paadhaiyil by Karthik Raaja (though the orch. is so Raaja) and remaining songs are IR.

Shankarlal only Ilankiliye was IR. Remaining Gangai Amaran. Both credited.

Chinna Thambi Periya Thambi, All songs Gangai Amaran except Oru Kadhal Enbadhu, which was by IR. IR was not credited. idha GA've othundaar.

As promised, a detailed post on a totally undeserving project called "என் இனிய பொன் நிலாவே" (by none other than Balu Mahendra)


2. As the titles VERY CLEARLY SAY, it has only SONGS by IR & MSV. Does not mention they did the songs together. The background score is by some newbee (Harichandran).

3. Obviously, our interest in NOT in when BM filmed the movie etc. (Just for curious folks - It could have been anytime between 1986 and 2000, it has a relatively young looking Pandiyarajan and BM's third wife Mounika.)

4. Per titles, all songs were by Vairamuthu. However, we cannot simply conclude that all were recorded before 1986. That is because, the album got released only in 1992 and there are some songs with Mano (who sang his first number with IR only in 1987) and also with LRE (impossible that she sang any for IR in 80's) etc.

That way, there could have been MSV-VM songs recorded post IR-VM ladai and got included in the album. Once again, we are NOT INTERESTED in such MSV songs with VM, for this thread.

5. So, that leaves us to look at the TWO songs that sound EXCLUSIVELY IR. (There is a FB link called IR Rare songs which suggests this idea too that the album simply had 2 IR songs)

6. We don't know when the songs got recorded at all. They were IR-BM-VM combo songs, perhaps recorded for this movie (or any other movie) that was in the making for ever.  Possibly, years later BM somehow packaged it with some MSV / Harichandra stuff to release the EIPN movie.

7. There are two IR numbers now on youtube (and one of the youtube comments also say that IR did just two songs). IR recorded these two songs sometime between 1981-1986 ; after which the project was possibly in limbo.


I haven't bothered to check the other MSV songs from the movie...not interested to search and share any link in this thread as well

I am glad that finally people are talking about Thalirkalil Pookkal. I discovered this song in thiraipaadal long time ago and sometime last year perhaps, I watched the song on youtube and realized that it was a Balu Mahendra film. I always ranked this song as one of the best by IR-KJY. And when BM passed away, none of the tribute articles or blogs mentioned this particular song - which surprised me. I actually wanted to write a post on my favourites in BM-IR and wanted to include this song. But i never got around writing that post till now. Thalirkalil Pookkal is an exceptionally good composition. I think it is in Keeravani raaga. The melody has a haunting quality. The first time I heard the song, the pallavi stuck in my mind for an entire day. That 2nd interlude with guitars interplay is such a beauty.

There is something about BM-IR-KJY combination.

The other song "Kaadhal Ninaivey" is a totally new discovery now. Yet to let the song sink in. Seems like a good one.

Greedy question: Does anyone have these two songs in high quality (mp3)? Or any source where I can buy?

Perhaps the most "re-used" melody of IR is 'thumbi vA' (kaapi).

That song is from a Vijayakanth movie called Auto Raja.

IR did nothing else in that movie (all other songs & BGM were by Shankar Ganesh).

I wanted to see what's there in the titles but couldn't quickly spot them on this youtube :

Of course, I have no intention of watching the whole movie to catch the titles

If someone had seen the movie (or its posters etc) please inform how IR got credited...

Here is the wiki page of the movie : http://en.wikipedia.org/wiki/Auto_Raja_(1982_film)

We've earlier hosted the vinyl cover in that thread...but it doesn't hurt to showcase here again: 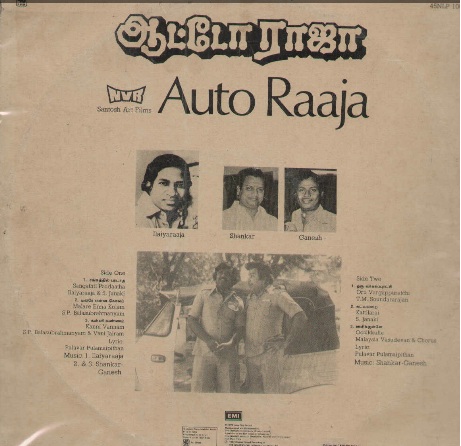 And here is the youtube of the IR song:
https://www.youtube.com/watch?v=eEQa7c4UAx4

The recent Vishwathulasi had songs separately composed by IR and MSV