The songs of Kadhalai Gauravikkum Neram can be listened to from the below link :
http://www.saregama.com/portal/pages/music.jsp?previousRequestUrl=film?mode=get_album_info%26albumId=11876 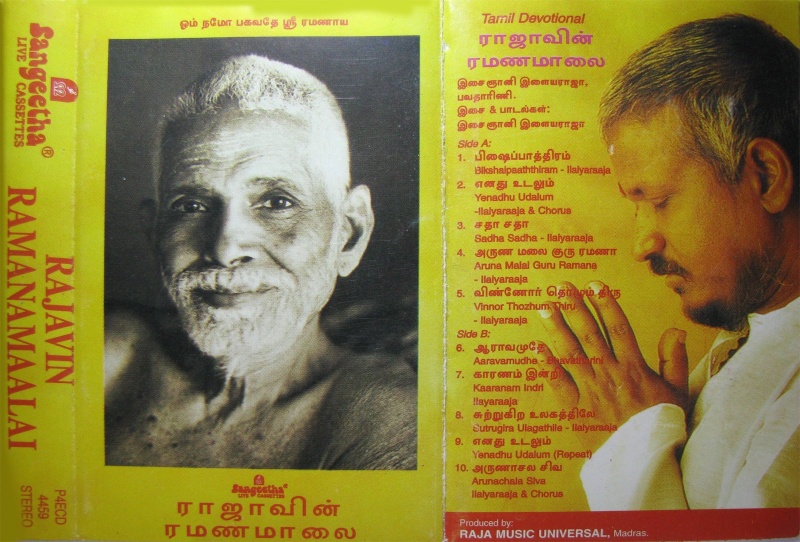 We were discussing about musicians in another thread , a scan mentioning some of the names of the great souls behind the scenes
Mayakannadi sleeve 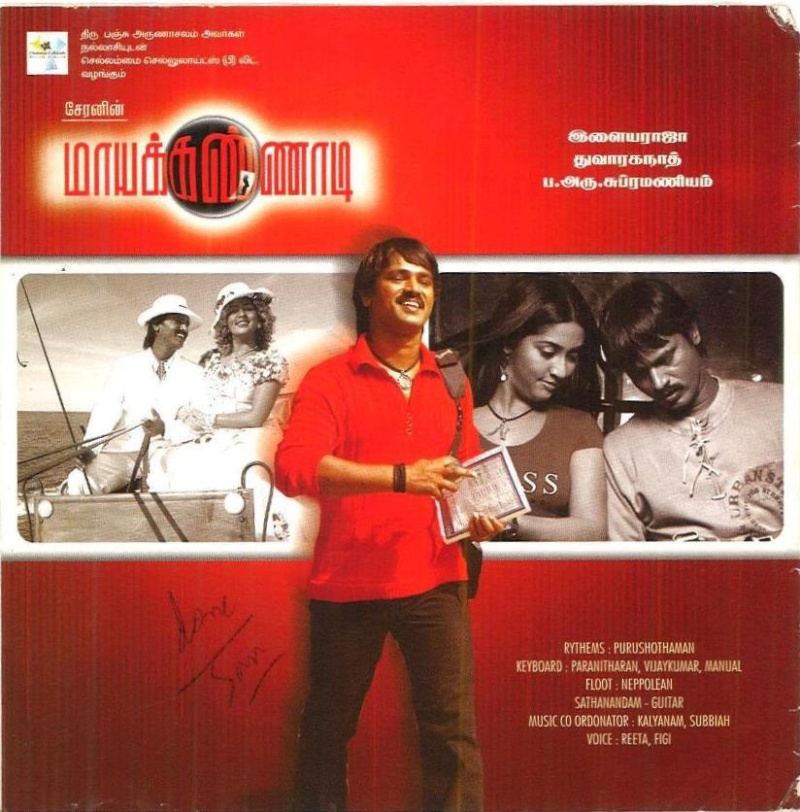 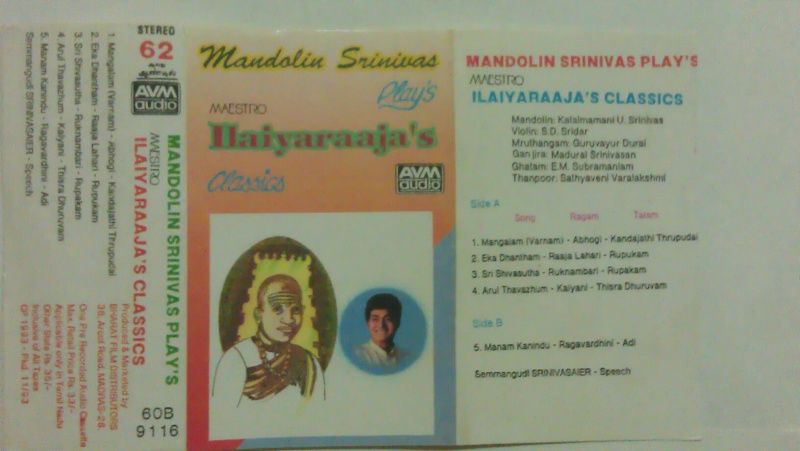 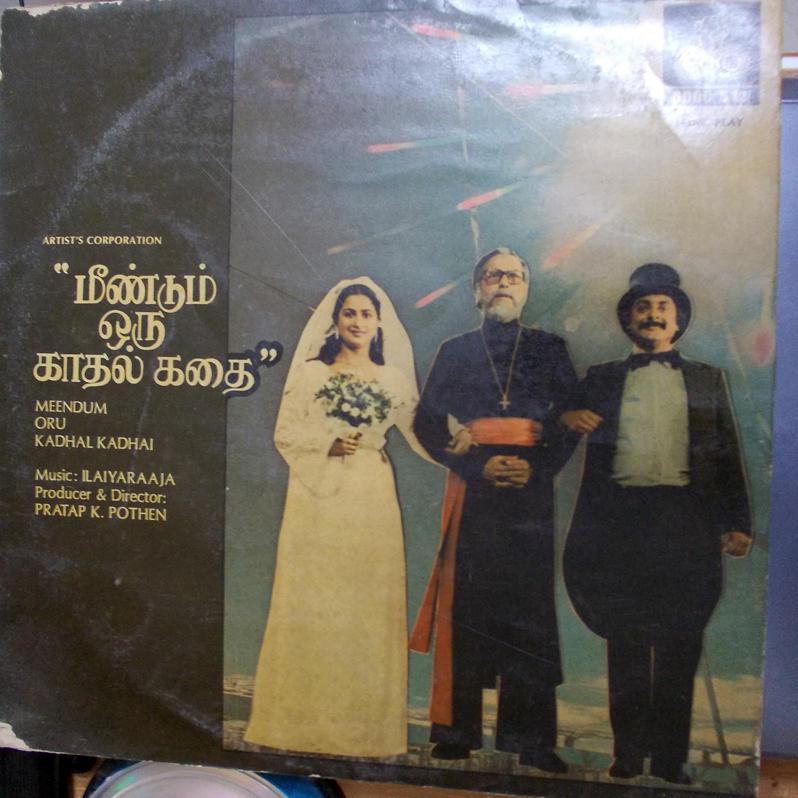 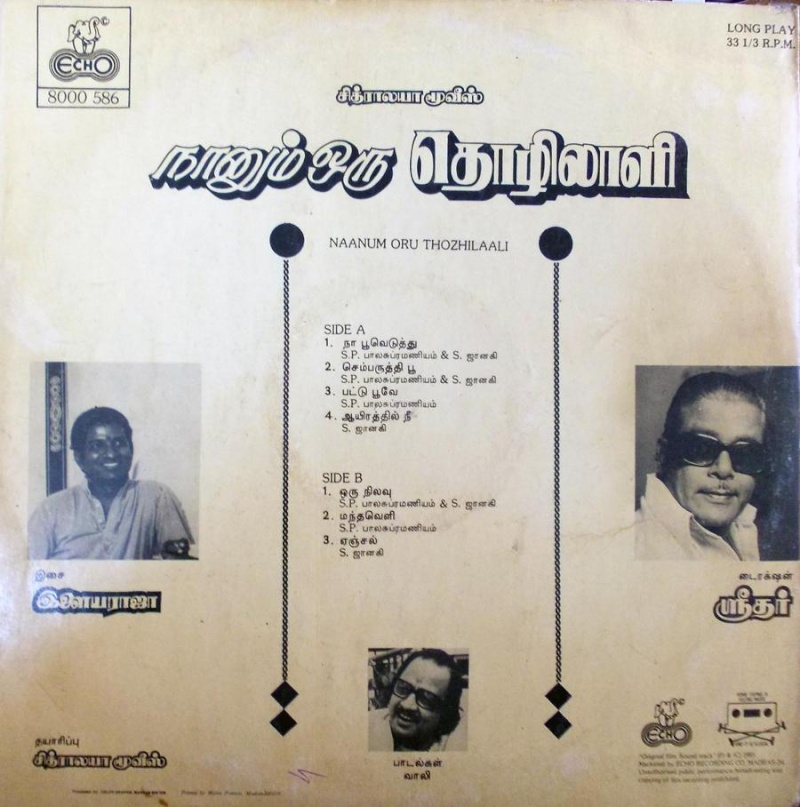 Also, suddenly they reverse the order and say Sadhanandham - Guitar - no discipline no culture fellows.

Unfortunately, rAsa has to work with such non-professional fellows all the time!

App ,
Hahaha , you are absolutely right .. not sure if you watched the trailer of Nadi Thudikkudhadhi
Maestro spelt as mastero
pursuit spelt as persuit

Disgusting that they cant even take care of these minimal requirements.

Really!!? More than flute spelt as floot - this gets me to boil over - this is perfect example of "Brahminisation" that (a)gnaani keeps talking about..
Raaja's simple outwarldly appearance needs no "brahminical" make over 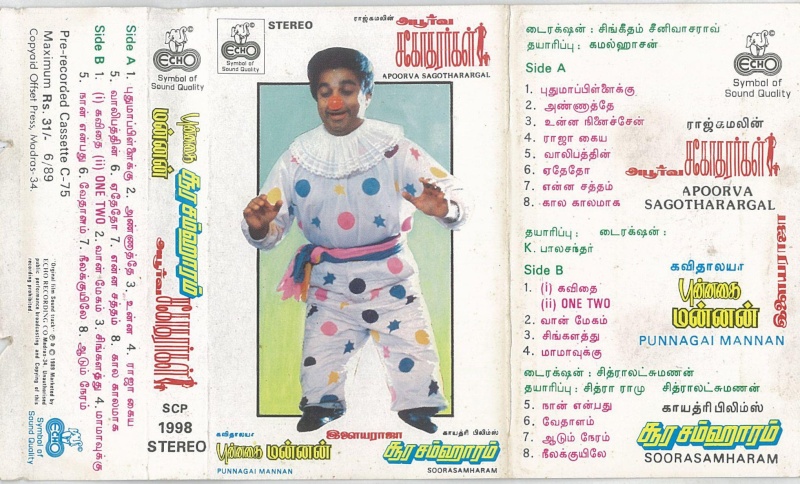 Another 3 in 1 cassette scan in the combo of Kamal - IR
Vetri Vizha , Nayagan and Michael Madhana Kamarajan 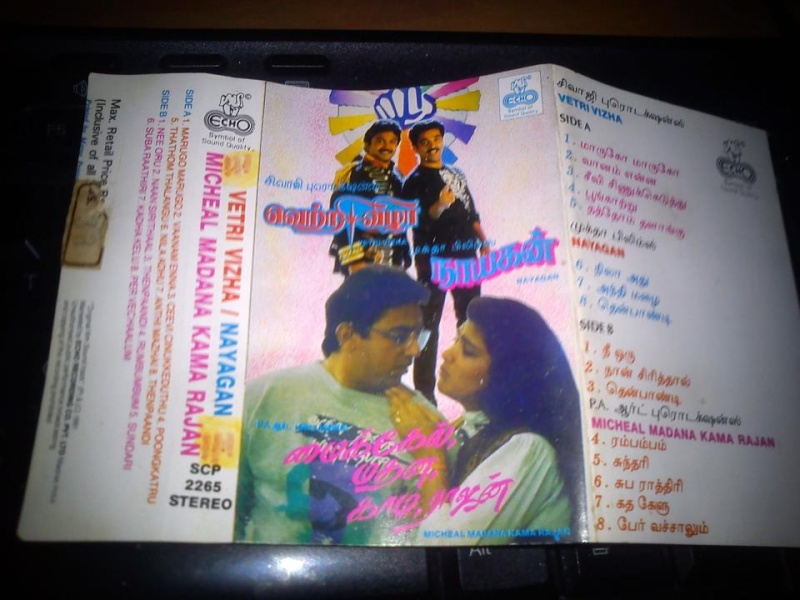 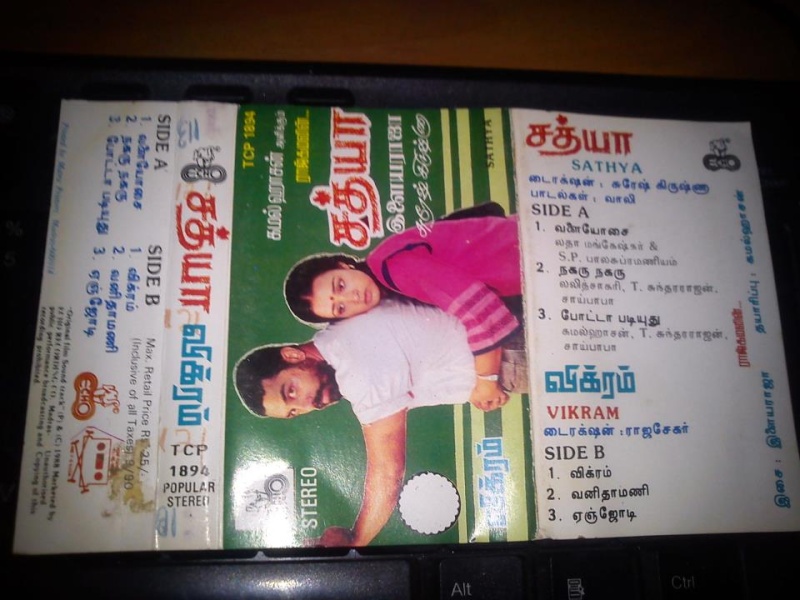 When I saw this forum and the vinyl covers, it took a while for the goose pumps to settle !  app_Engine, thanks for all the vinyl covers.  I was taken back to 70's and 80's.

I must acknowledge musicalaya.net who've hosted these covers - without which this thread would not have been possible! 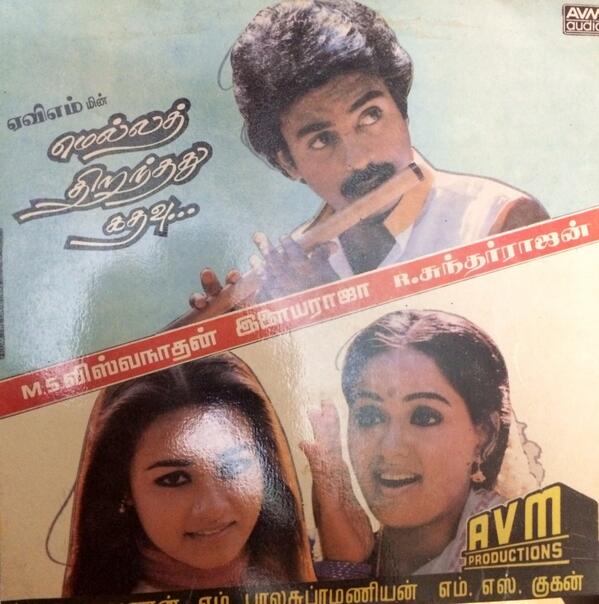 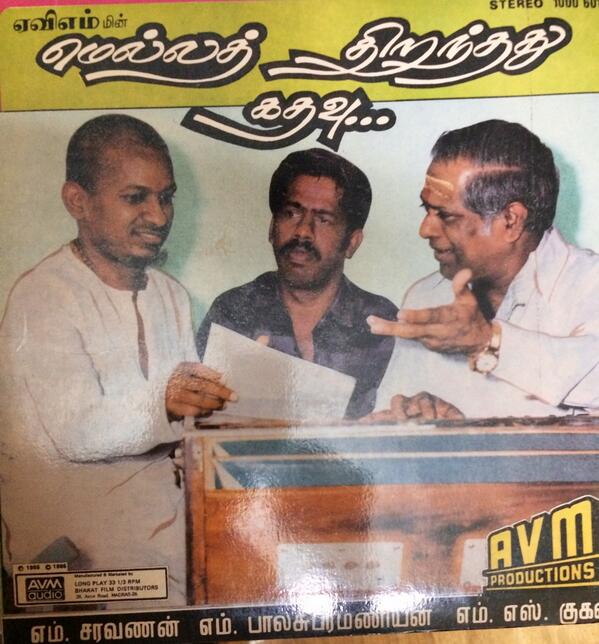 lol, MSV's name even precedes IR's.  What more was he supposed to do?

Oh god, I just joined twitter last week. The monumental stupidity, shamelessness and deviousness of some of the maniacs out there is hard to express. And I haven't even run into any VM fans yet....

An entertaining bunch for sure. Pig-headed, smug and self-righteous.

If even after seeing this, the maniac continues to maintain his " My father didn't know MSV was co-composer, neither did I" and uses that to justify his slander, what more needs to be said? They are mentally ill. As I was telling Munk, there must be a deeper reason for this irrational hatred of IR that some people harbour.

I guess it is not wrong to be ignorant of facts.

For e.g., many of my relatives too, who love MTK songs, aren't aware of the fact that the album had MSV. (I've even seen many people attribute EVERY HIT of 80's to IR, even though a lot of them were S-G / GA MD-ed songs. The poor-most guy should be that Devendran who did vEdham pudhidhu, totally forgotten and that kaNNukkuL nooru nilavA & puththam pudhu Olai varum are credited to rAsA by most people, not just those who were born later but pretty much the majority who were alive when the movie came out).

Ordinary people have a general tendency to give such credits automatically to popular artists. (Well, I'm one such too - who gave credit to MSV for a lot of 60's / 70's songs until I landed on tfmpage and learnt the contribution of the likes of V Kumar et al. Even KVM wasn't spared

And how many of us gave credit to GA for the many gems he penned? Or others such as Pulamaippiththan?

(Unless musicalaya vinyl covers opened out the data, I would have been ignorant in a number of cases)

That way, an average TN-er (especially those born in 80's or later) not knowing that MSV-IR did MTK together, is not a sin.

That ARRF is ok up to this point.

That such people came to know from the SJ interview about ooru sanam is plausible. With a strong ARR affection (and thus anti-IR), could have even thought foolishly that IR stole the credit.

Until that point, the fellow can be excused. (Even though his parents should have known better, being from a prior gen. However, it appears they too have grudge against IR - but even then, not knowing cannot be called a crime in itself, esp. in these 25 year old cases).

Crime started when the fellow started PROPAGATING his ignorance + venom against rAsA together on the net, blaming rAsA of stealing credits.

Before vomiting such thingies on the web, one has to CHECK THE FACTS. If not, getting beaten up / defamation suit / kaNdanangaL / vasaigaL etc are definitely in order. (Kamal Akarsh had been actually very polite in that 2009 thread to point out facts. However, the fellow is blatant and didn't learn from the decency shown by Akarsh).

If such characters have a little bit of self-esteem, they'll be quick to concede errors, post public apology and straighten themselves up.

That he is not willing to do but continue accusing people who point this out - calling names such as vidhaNdAvAdhi / I have no time for this etc, clearly shows they have no self-esteem.

The funnier lot are those who clapped when this guy threw such baseless allegations (and some later disowned him as well, while not feeling any remorse for blaming a genius artist

The worst case, obviously, is the one who tried to defame IRF's, as a counter-attack to the expose! (i.e. to the extent of questioning the character of some, on the context of twitter ID changes - despite he himself changing it recently)

Opportunity to identify that there are such twisted minds in this world, with whom one may be communicating unknowingly or foolishly - expecting reasoning powers.

Having posted this, I wonder why should any IRF be any more in dialog with such characters?

What kick can one get out of such interaction?