Remade in Tamil as Manidhanin Marupakkam, which itself is a remake of the original Malayalam movie Nirakkoottu featuring Mammootty.

She did a few great movies in Malayalam, "thoovAnaththumbikaL" being the best!

I watched niRakkoottu only in recent years (on DVD) and it's a nice movie.  OTOH, "poomAnamE" song is very familiar right from the time it came out - being my early days in Palakkad where it got played everywhere.

Especially in the bus in which I used to go to work daily! KSC still had the teenager voice in this song (which was a rage in Kerala).

BC wrote:
Sathya Jyothi    Remade in Tamil as Manidhanin Marupakkam, which itself is a remake of the original Malayalam movie Nirakkoottu featuring Mammootty.

She did a few great movies in Malayalam, "thoovAnaththumbikaL" being the best!

I watched niRakkoottu only in recent years (on DVD) and it's a nice movie.  OTOH, "poomAnamE" song is very familiar right from the time it came out - being my early days in Palakkad where it got played everywhere.

Especially in the bus in which I used to go to work daily! KSC still had the teenager voice in this song (which was a rage in Kerala).

That's all I meant!

"No comparison to IR"!

I do like Shyam's music.  Without any offense/disrespect to Shyam, IR songs are on a different plane altogether.

Also, I am greedy enough that Fazil's Manichitrathaazhu (songs by MG.R. & score by Johnson) should have been composed by IR!  We could have received a stunning album like Salangai Oli including the Background Score.

The audio sleeve image is from this forum itself!  Credit: karthicc

None of the 3 songs are available anywhere.  If anyone has the audio, you could post it here. 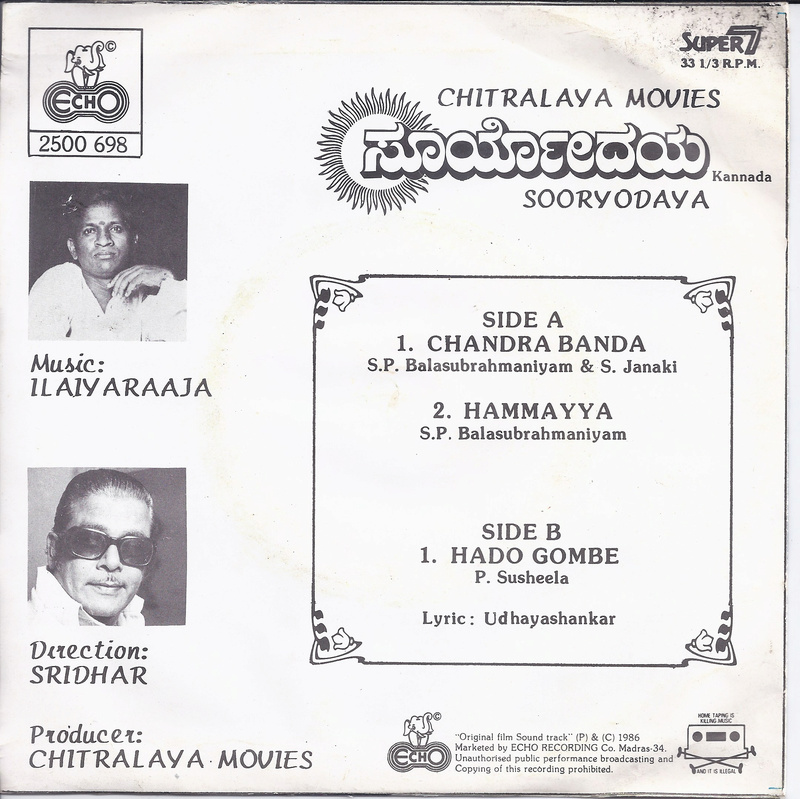 BC wrote:
I do like Shyam's music.  Without any offense/disrespect to Shyam, IR songs are on a different plane altogether.

Interestingly, while I very clearly knew that "vaishAka sandhyE" and the other songs I mentioned were by Shyam right then i.e. during the days they came out, "poo mAnamE" was a different case.

Never knew who the MD was those days

Didn't even know the movie the song was from. (Didn't care to check - any of my Malayali friends could have easily identified for me).

Only in recent years i.e. after watching the movie on DVD did I know it is from niRakkoottu and Shyam was the MD

Namma Bhoomi winds up the 1980s outing of IR in Karnataka.

Excellent album by IR, overall, with a good variety.  It has 7 songs, still uncompromising in orchestration or melody.

This is the song IR was talking about (maybe, at IIT last year), that the lyricists were unable to come up with lines for that situation, and hence IR ends up penning that song, all by himself!

Featuring the ever-popular Jeeva Hoovagide in which the music and vocals remind you of a perennial river.

Probably, the only time Rajkumar sang for IR (2 songs including the title song)

Seeing this thread only now. Wonderful. BTW, Rajkumar sang one more song later for Raja. It was for a Ramesh Aravind movie, titled 'Hoomale'. He sings the song 'hoomale hoomale'. His voice by that time had aged a bit but he sings well. The tune is lovely.
https://www.youtube.com/watch?v=NcJBq54Blic

Raaga_Suresh wrote:
Seeing this thread only now. Wonderful. BTW, Rajkumar sang one more song later for Raja. It was for a Ramesh Aravind movie, titled 'Hoomale'. He sings the song 'hoomale hoomale'. His voice by that time had aged a bit but he sings well. The tune is lovely.

Thank you.  I have never heard of that Hoomale song, though familiar with 2 songs from the album.  Will certainly add it, when getting there.

Yet another good album from IR.  But, as with several IR movies, all songs fell prey to an average movie, IMHO.

Looks like the director could not get enough of duets; probably he would have asked IR "Give me 5 romantic duets and 2 sad songs!".  IR would have been like "As if I was expecting anything else!".

Idhayam itself gave me a migraine, though I watched it first only 8 years later.  IR music was the sole saviour of that movie.

How many "love stories" does Indian Cinema have?!  And yet, till today, they keep churning out more and more of the same mediocrity.

A crazy roller-coaster ride!  A Zig-zag prelude and an addictive anupallavi

103. Naav handaang - SPB, Manjula Gururaj (the lady who sang Unnai thaane in Nallavanukku Nallavan) - Weird-sounding pallavi with a heady rhythm and a postlude - The last song in this IR-Kannada-hits-jukebox

108. Ghoro ghorokaana - SPB Charan - Same as the 3rd song but in a naive, tribal tone; rendered well by Charan

110. Hoomale hoomale - Dr. Rajkumar - Cheerful song; Rajkumar's voice has considerably aged from the times of Jeeva Hoovagide, ~ 2 decades; in some places, his voice in this song resembles that of MV.

121. Janapadha annodhu - KSC, SPB - Duet begins with prelude by SPB, but gets interesting with a twist of KSC rendering the pallavi - https://www.hungama.com/song/janapada-annodhu-namma-jeeva/2077800/

Of ALL the versions, with respect to music, Tamil version is the best, next is Kannada, and third only is Malayalam.  Histrionics-wise, both Kalabhavan Mani & Vikram score a century.
Background Score-wise, TAMIL Kaasi is the BEST

.  Anybody who have not watched the movie should watch it.  A good movie by Vinayan.  Yet again, IR gets NO award for doing all this.

Maestro IR always breathes the same air as the director or sometimes even outdoes the director's vision (a pride for IR; an envy for some directors).

Here, IR understands the emotions of a harmless, innocent, good-natured, blind man so well that he chooses the same singer for all the songs (Hariharan) and also tames Hariharan's sometimes-over-the-top nuance-tantrums down, because all the songs are sung by a naive, blind, rural man and not a sophisticated, professional singer!

Watching Kaasi gives you so much TRAUMA that you can never pull yourself up to watch it again, as seen only in another IR movie like Avatharam, Moondraam Pirai, Mahanadhi, Sethu et al.

124. Joli jokaaliyalli - Hariharan - A different song again, than the one in Kaasi album.  Cheerful song; a fusion of Folk & Western; well-rendered.

4 different songs for this Kannada album, even though it is just a remake.

Audio is on Jio Saavn: https://www.jiosaavn.com/album/namma-preethiya-ramu/G6Ade7VvFys_

A short and sweet album.  Yet again, everyone else gets some award for this movie, except IR!

The album has a whopping 8 songs, but still every song is a good one and nothing is average.

134. Bhagyada balegaara - Reeta, Tippu - This mellifluous song was tuned for the lyrics.

A loaded album with 8 fine songs.

143. Nannavale - RN - Choking song in elegy-style.  IMHO, this also should have been sung by IR.  While RN sang it very well, IR's emotional delivery is something else!

145. Yarivalu yarivalu - SP - It looks like Sriram has gone out of his box to croon this out, but his voice sounds ill-fitting; nevertheless a good version of the first song.

A good musical.  It looks like all the good music fell a prey for an average movie, as is the case with several IR movies.

I have described the songs in the order of my favorites - ranging from best to average.

148. Elli iruve swarave (Enge irundhaai isaiye) - IR, Nandhita - Complex composition.  It is amazing how IR was able to conceive a good orchestration, that is otherwise unrelated to the song, and molded it to suit the movie's situation and audience's taste.  Two versions are there: Happy & Sad.

154. Aaye aaye - Madhumathi - A better singer could have done some justice to this song.  Even more injurious is the cast and picturization - https://www.youtube.com/watch?v=vE6ruXBCbug

155. Haakku baa - Murali, Swetha - Not a bad song to listen to, but watch the video at your own risk!

The songs seem to be well-picturized.

Audio is on Hungama: https://www.hungama.com/album/suryakanti/1422323/

161. Mauni naanu - Karthik - Even slower, pathos version of the fourth song.  Karthik could have emotionally differentiated both versions better.  This is where he falls short of the likes of SPB, KJY etc. - https://www.youtube.com/watch?v=5oBwAPhlF28

Yet another good album from IR.

Audio for free listening is not available online.  You can download the songs as files, from https://wsongs.com/nannavanu.html but not sure if they are safe downloads.

164. Modhalane baari - Sweet romantic duet; SPB shoots up a bit towards the end of the second charanam.

166. Om Shivoham - SPB, Bela, chorus - Folk-style, dance-based devotional song, with SPB touching some high notes so amazingly well that my throat hurts!  Second interlude is really heady and fantastic!  It has NOTHING to do with its namesake Naan Kadavul song.

Lyricist: Hamsalekha! (It is amazing how another famous composer writes/works for IR, given that Hamsalekha himself is IR's peer and has composed for some popular numbers in Tamil like the ones from Paruva Raagam, Kodi Parakkudhu, Captain Magal etc.  And of course, yes, he is a fan of IR.  Turns out it is Hamsalekha who penned all the songs himself in the Kannada original of PR, Premaloka.)

Full version of the songs are available on Hungama: https://www.hungama.com/album/prasad-kannada/1425411/

Out of the 5 songs, one was composed by Mano Murthy which is not included here.

181. Bareyadha saalanu (Kaatru veliyil) - Sharreth instead of IR - Sharreth has rendered it very well, though I like IR's Tamil version better.

There are just 2 songs in the album.

Stupendous background score of the movie: