A similar doubt has come to our Sureshji on twitter : 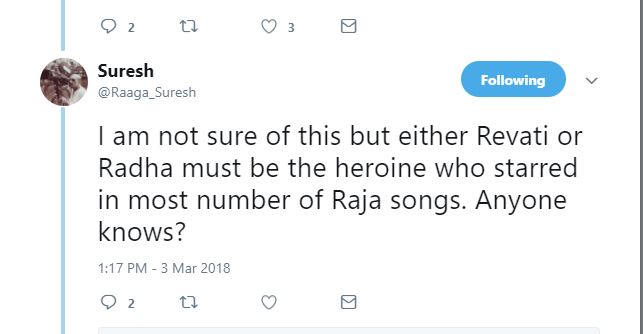 With Anbu sir's spreadsheet and all the resources available on the net today, how can we not resolve such an important doubttu?

Both these actresses didn't feature in the first 100 albums of IR.

One needs to look at who got a major % of IR songs during those first 5 years (most probably Sujatha, starting with annakkiLi and doing a ton of movies those days).

It will be another day for accounting of all the songs that IR gave to Sujatha...who knows, she could even overtake Ra & Re

Now, I'll have to set one very basic rule for this exercise (actually, this should have been posted in the beginning - but it's ok to define now as we have not gone too far. Actually, I've pretty much applied these yardsticks when posting the Sridevi songs in her obituary thread).

Rule :
The song's VIDEO should have featured the actress and got released to the public.

It doesn't matter even if the appearance is brief (as in one of the interludes) but on-screen is a requirement for counting.

As an example, "puththam pudhukkAlai" cannot be counted for Radha (even though the song got released in the alaigaL Oyvadhillai disk). Any kind of argument, like, "didn't IR compose the song with her in mind" won't fly

Actually, this song got recorded for Mahendran's marudhANi it seems (which is prior to AO). We cannot get into such undocumented details for this statistical exercise.

So, video with the actress is REQUIRED for counting here.

Today, on MaestrosApp, the app jockey Jayachandran played "alaigaLE vA" song (UR-SPB, kavidhai malar) in a program featuring "Madhavi songs". I got irritated as the movie never got released and one won't know if it indeed had Madhavi. Simply seeing her on vinyl cover won't automatically qualify that to be a Madhavi song IMSO!

OTOH, a song like 'idhu oru nilAkkAlam' (or kanavugaLE kanavugaLE of Anandha rAgam) can be counted as a Radha song, as she is seen on-screen, though she may not be doing any lip-sync.

Out of all the albums IR had released in TFM, Radha had 3 movies and Revathy had none.

Songs which could be traced to have Radha on-screen :

Personally I am not in favor of any actor being associated with a song. In film music, somehow we see collection of songs being called MGR songs, Rajesh kanna songs just because these actors lipsynced those songs.

I do not mind a TMS collection or SPB or Kishore or Lata. They all played an active part in the song. In reality it should be MSV or SDB or MM songs.

If we are mature enough as an audience we should have Sada songs or Napoleon songs or Kebu songs.

This is going backwards. My 2 cents...

The idea of Sureshji's thread on twitter was basically like "Look how many female new faces that IR helped become popular among people!"

That way, while the songs of other time periods / MDs etc could possibly be stolen away from the composers and wrongly credited with stars who showed their faces, such a thing cannot happen with IR.

Such history cannot be easily erased - actually, as time moves on, the stars have progressively diminished from people's memory in association with songs and even a commoner in TN associates them with IR only.

The only value I give to any actor is that some of them have the ability to popularize a composition by their screen presence.

When I did the research for obscure movies where Raja did some great harmonies, most of them turned out to be starred by B or C grade actors and bad directors who destroyed the effort of Raja. There are also a few average compositions of Raja that got popular due to the star presence.

Music will benefit somebody or the other, wen it is part of any team effort - cinema is always team effort.

To take an extreme example, some tailor or cobbler would have got benefitted as they did the outfit for Mozart or Haydn or Beethoven. They made them look nice but the focus is on their creation, which has nothing to do with these personalities.

vAlibamE vA vA (after kAdhal Oviyam failed at BO, BR rushed to make this with Karthik-Radha and failed again)

Quite an interesting coincidence

Since I've watched maN vAsanai only in college days and never after, browsed thru the youtube to make sure whether the song "kuyilE kuyilE koovAdhE" got picturized & ended up watching some portions of the movie yesterday.

And this morning I get to read this article by Magudeswaran :
https://tamil.filmibeat.com/specials/bharathiraja-s-manvasanai-052373.html

Albums released in this year didn't offer much quantity to both the females. Quality was always top notch with IR (sOlaippoovil mAlaiththenRal is an all-time-great song)

Radha had few (movies with multiple girls sharing the songs) and Revathy had none.

muthu engal soththu (Radha and others)

The year had a ton of albums released by IR and both the ladies had many super hit songs.

For a change, Revathy seems to have appeared for more songs on screen during this year.
(Earlier posted that I cannot confirm 100% as the videos of all songs of 'kai rAsikkAran' featuring Prabhu-Radha are not available / accessible to me at that time - after the mail from Anbu sir, modified the post adding one more song!).


So, the count at the end of 1984 albums is Radha 53 v/s Revathy 19 (resolved the unknowns from kairAsikkAran thanks to e-mail by Anbu sir! )

As always, 1985 is the music release year, movies could have come in the same year or next...

This is an interesting year for both these actresses as they had a chance to act "together" - means in the same movie, though not in same scenes - by the director who introduced both, BR. What's more, both acted as jOdi to Kamal (one to father and another to son, however).

oru kaidhiyin diary (Radha / Revathy each had a song)

idhayakkOyil (Ambika-Radha, both sisters in one movie, directed by Mani Ratnam)

Japanil kalyANarAman (No Sridevi here, Kamal had to settle for Radha

kumgumachchimizh (most songs went to Ilavarasai but a couple had Revathy)

Selvi (songs went to many "actresses" including circus dogs

So, looks like Re is catching up with this year's numbers...

Both actresses had the benefit of being on screen for 4 albums each, released from this year. Revathy had a few extra numbers because of musicals punnagai mannan & maragatha veeNai. OTOH, there had been superb hit classic for Radha too, such as 'kuzhaloodhum kaNNanukku' & 'ooru sanam'. Let me list the songs...

That way, Radha still keeping lead but Revathy reducing the gap....Ra 84 / Re 56

Radha got 3 albums from IR while Revathy got just one. Awesome songs in all the four albums, however

Anand (Radha got a ton of songs, including the first IR-LM song in TFM )

jallikkattu (Radha had five songs from a NT movie! )

So, Radha increased her lead in this year...looks like it will be difficult for Revathy to catch up as both were about the practically retire from playing main roles (and thus getting less songs from IR)

End of 1987 albums : Radha - 98, Revathy - 61 (BTW, Revathy is still to cross the Sridevi total of 69 TFM songs. I wonder if others such as Sujatha, Ambika & Radhika have equal or more numbers than her)

Revathy drew a blank this year! (Probably she was losing out to newcomers - esp Nadhiya in this time period). Radha had 6 songs, to reach her century with IR in TFM

en uyir kaNNammA (Radha and Lakshmi in a movie directed by Sivachandran, husband of Lakshmi)

rAjAthi rAjA (produced by IR, Radha and Nadhiya for two roles of Rajini)

I now wonder how many other heroines have more # of songs than Revathy... as of this year, Radha - 104 v/s Revathy 61 is a no-competition situation!

Radha got two albums (chinnappadas / pick pocket, both movies with Satyaraj) compared to Revathy's one (arangEtRa vELai which released in 1990).

While movie videos of chinnappadas and pick pocket could be found on youtube, the songs themselves aren't around. Didn't have the patience to browse the movie to conclude what songs show the actress - jumped here and there to find some and those are listed below. If someone knows other do have her videos, please inform.

Looks like the stream had dried up for Radha in TFM by this year (there are some Telugu dubbed movies / albums but I'm not counting any such for this exercise).

Revathy was still in reckoning and had 6 songs (from anjali, kizhakku vAsal and also rAjA kaiyA vachA where she did a cameo).

kizhakku vAsal (Kushbu had songs too)

Looks like none of these two had any song from the 1991 albums.

With Radha's marriage and quitting the TF industry in 1991, no more songs for her anymore! So, it's a question of whether Amai will do the catch-up...

maRupadiyum (BM movie, Rohini got one song and others for Revathy)

So, yet to catch up but a big harvest for Revathy in 1992 without doubt!

In any case, one album from this year.

Are this many numbers yet remaining? Let us see!

Revathy adds another 4 songs to her kitty, from the film "priyankA".

I couldn't find the video of the sweet song 'gnAbagam illaiyO' (possibly not included in the film). If that was indeed in the film, with Revathy on screen, she will get one more. For now, only 4 - but that helps her move closer to Radha!

And that is curtains (so far...BTW, Revathy is still acting, even showed face in a movie recently for which IR was the composer - ammA kaNakku. She didn't get chance to show face for any song, though. There is still possibility for her to reach out and try to compete with Radha

So, as per the final count, Radha wins with a 7 song difference

So close , Should we continue the thread with next pair of actress

pgramss wrote:So close , Should we continue the thread with next pair of actress

There are some with probability to topple Radha.

From a quick scan of the Anbu sir's spreadsheet and some wikipedia based filmographies, following could be contenders for the title :

-Radhika
-Suhasini
-Ambika
-Kushboo
-some others, like Sujatha / Nadhiya / Shobana and suchlike ones