For the debut movie of Mani Ratnam, IIRC

Thanks to an accident, there had been a temporary "downgrade" to one of our automobiles (from 2014 model to 2004 model of Jetta

Thus my son is playing a lot of CDs nowadays (his and his friend's) and one of them happened to be in the car when I took it a week back.

I'm not a big fan of Yanni (predominantly keyboard sounds / melody non-existent or one that is difficult to follow etc). However, I let it play on that particular day.

It started from somewhere in the middle - I later found out that the album is named "Devotion" and the track happened to be "Marching Season".

What instantly caught my attention was the "misra nadai" - something that one does not often come across in western songs. Listen to this track here:
https://www.youtube.com/watch?v=Bbk05TyNq8c


Well, out of curiosity I was trying to find the nadai for rest of the tracks in that CD and was surprised to find that Yanni had misra nadai for 3 out of 15!

The other two are these:


A love for life
https://www.youtube.com/watch?v=CygGQKQFg_E


I cannot help but play some of these for a few times during the last week - purely for the beauty of the rhythm arrangements (that last portion of "Within Attraction" is very catchy).

Now, on one ride, my daughter was in the car and asked me "What Ilayaraja song is this, only instrumental?"

When I said it's an EU composer called Yanni, the 11 year old remarked "He sounds like Ilayaraja"

I guess it must be because of the "misra nadai"! 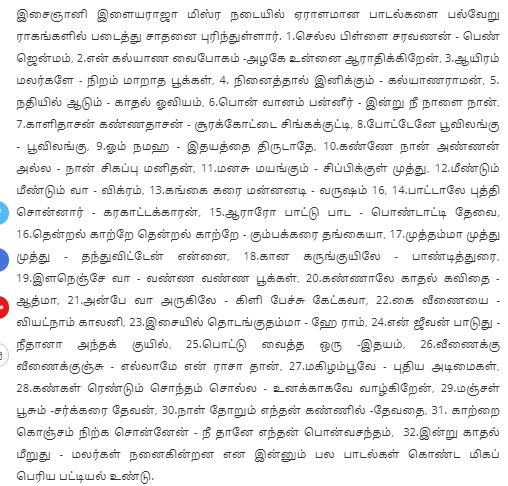 Of course, our thread has almost double the number (compared to that list) for IR

I have added three YT links in the "Anything about IR on the net" thread where the director of this movie reminisces many things about his film field experiences, that include some special ones with IR. Dennis Joseph, who did this movie was the script writer for many commercial hits during the famous 80's of the MF field, the biggest one being New Delhi - that was a blockbuster and a milestone in Mammootty's commercial career. (The story has some inspiration from Irving Wallace novel Almighty, nicely localized to suit KL sensitivity as well as Delhi politics).

In one of those videos he talks about three hit songs  of atharvam that are popular to this day. I could quickly recall puzhaiyOraththu & poovAy virinju (this one is a thaka-thakita number and got covered in the kanda chApu thread).

I was intrigued, what was the third one

YT gave me the answer and that is this song, which runs in misra nadai. It is funny to see Suhasini's dad in the visuals for this song. There's also actress Jayabharathi who was active in both MF and TF those days (a famous one being MMKR where she is the mother of the quadruplets M,M,K,R ).

There's another #IR_misrA song in puthuppAttu, which cannot be added as an additional number here but should be documented.

This is not in the disk or anywhere else but only in the OST, at the end of the titles.

Very sweet - IR possibly added this during the BGM work!
(Movie was produced by IR and directed by his mentor Panju - it had terrific songs besides this short and sweet number).

I got the same link earlier and covered this song as #54 in this thread:
https://ilayaraja.forumms.net/t259p50-misra-chapu-raja-63-ambilikkalayum-posted-waiting-for-more#22339


He also sings well some of the songs!

(meeNdum meeNdum vA / manasu mayangum / pon vAnam panneer and some others we've seen in this thread before).