IR Musical Playlists !!
There are different Isaignani songs which kindle our emotions in different ways. For every situation , mood , feel , thought etc his music always comes in handy. Lets start forming our very own Raaja playlists. We can take a theme , it could be anything ranging from songs on a rainy day to a long distance drive or maybe an instrument usage such as Guitar Ragalai/Violin Convergence or perhaps foot tapping dance chartbusters or even numbers apt for a festival occassion like Pongal , Diwali etc and many more. Lets make it interesting by having various themes.

Themes can be generic in nature like say IR songs with english lyrics , songs with 3 charanams , flower songs of Raaja , songs beginning with "Raja" etc and also specific like listing songs with claps , songs having crescendo style finish , songs with crackling preludes , convergence of violins , songs employing male chorus etc.
Once we list down the songs in a particular theme/category we can have it like a playlist. Start music.

I will just start with the first category - Raaja's songs with English lyrics.
We discussed upon this briefly in TFM page , but i think it will be better and apt if its mentioned here too.

1st Category - Raaja's songs with English lyrics
The criteria is that atleast a major portion of Pallavi or Charanam should confine to English phrases , not just random english words appearing here and there.

Starting the countdown with a short and sweet full fledged song with english lyrics.
Penned by Viji Manuel and rendered by Dr Kalyan , this is one song which i discovered only about a year ago. And ive loved the song ever since. I guess V_S ji too has a lot of liking for this number.
Darling I Love You - Aaradhanai

Another beautiful lovey dovey composition almost fully with english lyrics rendered by Malgudi Subha and penned by Viji Manuel.
Just love the feel of this song which follows the Waltz rhythm.

All the Time - Nadodi Thendral

Perhaps IR's first song with full english lyrics penned by Viji Manuel and rendered by the inimitable SPB.
Unfortunately there isnt a single link on youtube hosting this song , but we can hear it from here.
http://tamildada.com/kavari-maan/

What a lovely song!

And, I've never heard this one before

One more to this "English" playlist (well-known one, from rAsA's 100th film, sung by Dr Kalyan again)

Sing with me now

Next two songs on the list - I want to Tell you something and Hey You Come both from Anand.
(Beleive from a youtube comment the former was shot entirely inside Park Sheraton hotel).
Both these songs have decent usage of english words in the Pallavi and both were penned by Gangai Amaran and rendered by SPB.

Incidentally App sir covered both these song in The Golden Era of Dr.IR and Dr.SPB thread ..
Quoting his writeup on these 2 songs :

"Recently, skr sir had been trying to collect rAsA's English songs and this Anand movie is notorious for contributing 2 among his list, though not entirely English songs

Both are part of this post and I've heard them on buses, both as songs themselves and as fillers (cassette ends). Nicely paced, dance worthy and some interesting arrangements (guitar / wind konjam thookkal & drums as per prevailing standards of the time). In any case, I don't remember having any emotional connections with these songs but I'm fairly sure they were heard around TN and can be classified as "bus-hits".

Like I mentioned in an earlier post, let me use these songs to talk about a huge shift in my music listening sensitivities around this time period. I am very sure most IRF's who are today in 40's-50's had undergone similar shifts during their lifetime (some prompted by IR getting into other lang fields, others prompted by his interviews / statements etc). Most hubbers here can relate to predominantly listening to alternate forms of music at one point of lifetime or others. Well, to me that started during late-87 and went on to full-blown state in the next few years

It wasn't like the leanings towards MJ or MFM but on a much more strong bonding level. Ofcourse not HFM (already informed in a reply to Plum).

While frequenting the cassette / recording shops in Palakkad (actually there weren't too many, 3 or 4 cassette shops & only one recording place I'd been to), on one evening I spotted this casstte with a beautifully illustrated inlay card. It had the name "Paul Mauriat"! What! I couldn't believe my eyes and kaNNaikkasakki vittu, maRupadi pArththu made sure. The album had the name 'nagekidori'. (From the time I read about him in Kumudam sangeethakkanavukaL, his appreciation for EdhO mOgam etc, the name was strongly wired in my mind and I didn't have even think a second to recognize the name). Within a minute, the cassette was mine and I was feverishly walking to the room to stuff it into the walkman.

'nagekidori' was PM's own composition and had mesmerizing flute work that did something to the nAdi-narambu. Then there was the instrumental version of Whitney Houston's "Didn't we almost have it all" that I immediately recognized and was spellbound by the tremendous arrangements. The best piece, however, was "back to the pyramids" (I'll try to get youtube links once I reach home). It pushed the spirit to some levels that I've never experienced prior! (Ofcourse, I may not feel the same way today - but at that age, circumstances and position, it was...unlike anything I've experienced before...do I sound like some sAmiyArs / preachers?

Music has power I say!)

Thus started my hunt of any cassette with his name on it! 'Love is blue' 'Classics in the air 2/3' are among the best but there were just too many and every visit to Bangalore had me hunting around the music shops for some collection of him or other and I was also feverishly sharing them with many associates, relatives (sometimes gifting - last year I met a cousin after years and she had Love is Blue on the smart phone (not by PM, some other version) and recalled how I introduced to her that track years before). I was overjoyed when identifying the Mozart symphony that was used by National Panasonic as demo to be PM's version!

It wasn't a fad but lasted for years, changing my music listening taste forever! Even now, I can't stop with just one listen of 'love is blue'!"

I want to tell you something - Anand


hEy you you come to me - Anand

Another song with English lyrics from the 2000s.
Love is the Meaning of my Life from the movie Manasellam. It comes towards the climax of the movie. Jimmy is the singer , not sure of the lyricist.

Love is the meaning of my Life - Manasellam

Another one from the 2000s from the movie Julie Ganapathi.
A rock n roll number kAkkA kAkkA kaRuppu rendered by Anitha and penned by Pazhani Bharathi.
The initial one minute bit comprises a part with English Lyrics.

Another one from the 2000's with really funny lyrics from the movie Devan.
Check out the english portion of the lyrics below :

One more from that is the "baby, you're my baby" from oruvar vAzhum Alayam

And it lists singer as Anuradha, who is it?

To listen to the song, try this link: tamiltunes

Thanks a lot skr for starting this wonderful thread.

I have been thinking of starting this thread long time ago. Each IR playlist would form a separate thread on its own (as we already seen in some of the threads here itself) as it's not merely listing out songs in a specific category, within the same category how Maestro has created the difference (in terms of genre and mood) is much more fun to analyze.

Maestro's English songs is a nice start to this thread as it not only speaks how Maestro pioneered this category, but also proves how he pulled back those songs into his own genre. Yes, the tunes are western, but what stands out here is his orchestration which will truly tell who the composer is. A big point to note is all with respect to the situation of the movie and Maestro did not compose all songs in a movie like this, like we hear today. Again considering his huge music repository of 5000 songs, this category might cover just 20 songs which tells Maestro does not succumb to those western genres often, except when it matters the most.

Here is the full version of Swing Swing (Sing with me) from Mood pani which skr posted earlier.
_________________
Art is a lie that makes us realize the truth - Pablo Picasso

Aruvadai Naal had this short choral based English number as also confirmed by the last song in Side B of this cassette cover. 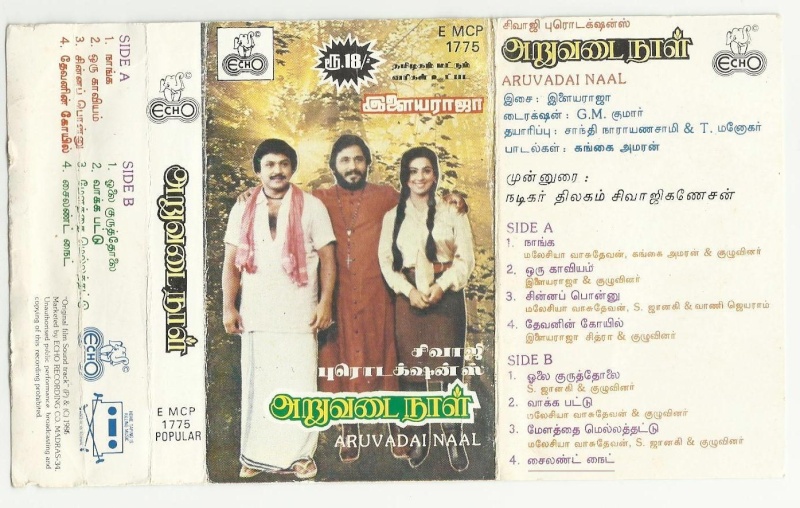 Not able to find any link on the net which is hosting this song , so uploaded it myself.
Silent Night - Aruvadai Naal
https://soundcloud.com/skrajiv/silent-night

Raaja Sir also composed a song for the Aids Campaign Titled 'A Time For Heroes' which has lots of English phrases.

Coming now to a stunner in Hindi. This could be perhaps Raaja Sir's longest English song and its rendered by Sharon Prabhakar.
You are My Dream - Kamagni
https://soundcloud.com/dileep-kumar-shatdharshanam/you-are-my-dream-kamagni

Guess all the English songs of Raaja sir has more or less been listed. Please mention if i have missed out any.
Compiling the full English playlist :

Thanks Usha ji , Appji and V_S ji for your contributions

Compiling the english songs was more generic in nature , next theme we will try to make it more specific by making it lively and engaging.
Guys please suggest something fun and interesting.

Some topics running in my mind :
1) "Raaja" songs ie songs having the word Raaja in its starting lines.
2) Crescendo style finish -  ie listing down song where the finish of the song is very high octane to say the singer going full throttle or instruments colliding , converging and giving a grand thud/sign off to the composition
3) Something wild like Midnight masala songs or Stage Disco songs

If any of you folks have better topics , please suggest. We wil get going