Since I could not locate your post / video, I'm posting a link to the Youtube video:  https://www.youtube.com/watch?v=vYj3EzQj5DU    Where is the Jency version?

This is my original post on the song, in this thread:
https://ilayaraja.forumms.net/t254-all-31-songs-that-jency-has-sung-for-ir-30-31-niram-maradha-pookkal-short-songs-all-songs-done-#21587

I cannot easily locate the twitter thread but @vrsaran had been telling others about him having a Jency version audio copy in that thread. Well, I don't have it but will have to abide by two things:

Yes, I just had a look at your post.  But seriously, it did not sound like Jency to me.  To quote Usha "indha padathil... ovooru singer kum oru paatu iruku. adhanal.. Jency ku 2 chance ilai."

There is no confusion with that "iLampaniththuLi vizhum" song - it is the problem of those stupid websites. The singer is very clearly not Jency neither does the audio credits say that way. (Actually one of our fellow forumers, plum, had seen the singer Radhika herself in the wedding of a relative).

This is a clear case of having her name on audio sleeve.

Also, with this song, none of us are claiming the Sujatha version to be Jency's

Every one of us TOTALLY and COMPLETELY agree that there is a Sujatha version. (I have the movie DVD with me and can vouch for the fact that the one used in the movie is by Sujatha - and I have absolutely no confusion differentiating these two voices myself). So, we are not taking the credit away from Sujatha to award it to Jency. No way!

The question is whether there had been two versions or not. For now, I go with the "two versions" theory.

BTW, I was really surprised to find out sometime back that there was a Jency version of the celebrated "azhagiya kaNNE" song (running as BGM in the uthirippookkaL movie, link posted by UshakkA in the previous page. I didn't notice it when I watched the movie on youtube few years back).

So, if the IR-Mahendran combo decided to have even "azhagiya kaNNE" in Jency's voice (besides having her sing pretty regularly for Mahendran movies - starting with adi peNNE of muLLum malarum), I won't be surprised if they recorded two versions of 'oru iniya manadhu' - one with Sujatha and another with Jency.

Unlike Sujatha, Jency was pretty much an "all-IR" kind of singer those days.
(Besides a couple of unknown songs for IR's brother, the only song she sang for "outside MD" was "paniyum nAnE" in S-G music in her entire TFM career, phase 1. I believe her phase 2 was with a song for Srikanth Deva, many decades later).

This cannot be counted as its not a song. But still, worth mentioning here. I am referring to the sweet melody line which runs through the length and breadth of "kizhakkE pOgum rayil", as Jency's humming. What a haunting piece!!!

mythila wrote:This cannot be counted as its not a song. But still, worth mentioning here. I am referring to the sweet melody line which runs through the length and breadth of "kizhakkE pOgum rayil", as Jency's humming. What a haunting piece!!!

Portions of it reminded me of the second interlude of "iLamanadhu pala kanavu" (of Selvi) where there's a female chorus humming that's somewhat similar.

BTW, the titles show that K Backiaraj has written song(s) in this film, besides being the "udhavi" for dialogs. I'm wondering what song(s) had he penned... 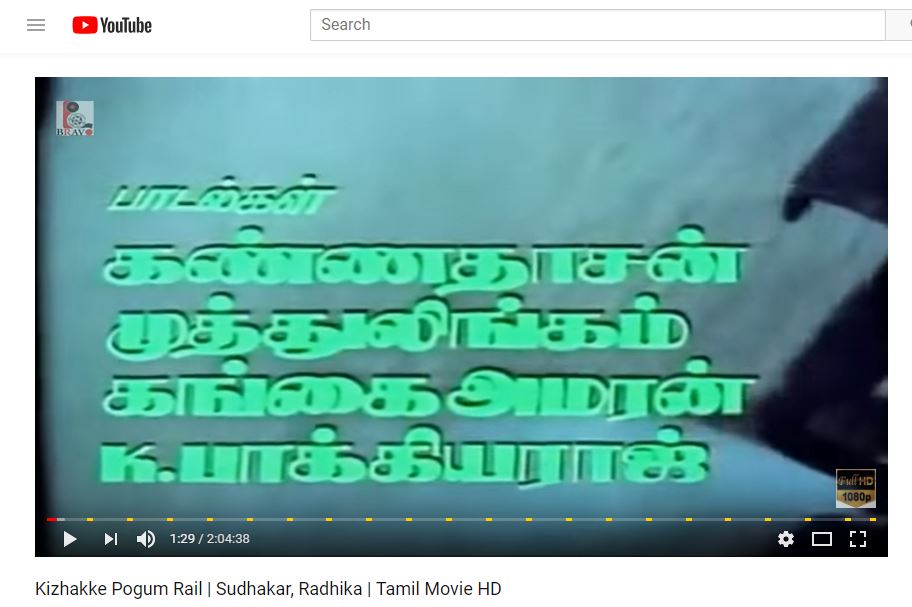 Checked Anbu sir's spreadsheet, which lists as below :

kOvil maNi Osai thannai - Kannadasan
malargaLE nAdhaswarangaL - Sirpi (unfortunately, not only this song got left out in the movie but even the name of the lyricist is not shown)
mAnjOlaikkiLi thAnO - Muthulingam
poovarasampoo pooththAchchu - Gangai Amaran

It's possible KBR wrote both or one of these two. I wonder which one(s)...