BTW, I do believe that "sol" came into existence BEFORE "kal"

However, flesh & blood humans could come ONLY after "kal" (aka matter / material).

Our point of discussion is only about which sol came first, Thamizhchchol or vadamozhichchol

From the Malayala wiki  :

From the Thamizh wiki :

Of course, there are a number of things one learns when such a discussion happens (though some misunderstandings - such as considering me as some kind of vadamozhi-promoter

There are additional tweets in this thread wherein one can LEARN some info on vadamozhi :
https://twitter.com/kryes/status/463813855940845568

For e.g. it is 'nArikEl' (नारिकेल) for coconut in "spoken sanskrit" (as per a DE dictionary, I thought it's not spoken anywhere except temples anymore...and has been replaced by Hindi and a host of languages) :
http://m.spokensanskrit.de/index.php?tinput=coconut&trans=Translate

It was quite interesting for me to find out that the 7th century Thamizh litt. 'dEvAram' used the Keralite term 'nALi kEram' for coconut (ThirugnAna Sambandhar).
http://www.thevaaram.org/thirumurai_1/onepage.php?thiru=1&Song_idField=1066
(Since this was primarily Saivite devotional litt, there are tons of vadamozhi words - albeit in their Thamizh form - used)

End of the day, though scientific analysis and such terms are being tossed about (and naturally the westerner references are being cited), due to the nature of time lag (we are at a point in history 100s of years later than the formation / transformation of these words), multiple theories are bound to be seen around.

Though some in twitter thought I was unnecessarily ridiculing Thamizh (for the 'kal thOnRi' reference above, which was not even making fun of the uyarvu naviRchi and definitely not the language itself) and got angry, throwing challenges at me to show Sanskrit references of lakshyam, lakshanam, kEram etc (for which I am not batting for, though biased in favor

), I can only arrive at following conclusions that are reasonable IMHO:

1. Thamizh enthusiasts strongly believe chEraLam became kEraLam and this is supported by some western scholars as well. (Refer the Malayalam wiki above). Interestingly, "tea innum varalai" for how Ch became K. The Malayalam wiki states Karnataka pronunication as the link

2.  Malayali popular opinion, OTOH, favours the name coming from kEram (whose origin cannot be google established, except that dEvAram ref.) That of (nAri)kELam becoming (nALi)kEram is as tenable as the claim of Ch-K, by "equal opportunity"

3. Malayalees themselves agree to the prevalence of multiple opinions on the origin of the name, including from chEraLam

Yes, it was unfunny to get shouted at, esp. for errors uncommitted (use of ஏகதேசம், அறம் இல்லாமல் எள்ளல் etc which were not by me), it also underlined the sensitive nature of such topics and how some can be instantly triggered

The blog post's anger is directed at me, claiming me supposedly doing the two following things :

a) எள்ளல் of தமிழ் (which is a serious charge - well, show me where I've done in this thread! That is not the same as எள்ளல் of false pride & stage mAr thattals - that I definitely did; even kids reading this thread can get it - I'm surprised such a scholarly person is blind to this and gets into battle mode with me

b) Support for certain legends (The blogs says I'm one of "கப்சா"லயே ஊறினவங்க, quoting mahAbali kind of stories - for which I've never batted for

Accordingly, I don't consider it is anything against me, in essence

Also, I'm posting the link here, for the nice explanation of the original context of "கல் தோன்றி, மண் தோன்றா" phrase (i.e. as it occurs in the seyyuL) :

BTW, my "making-fun-of-fanatics-who-use-this-phrase-OUT-OF-CONTEXT" is still valid!

Since I'm not one of such mAr-thattal fellows, I don't feel shy reading this blog post at all! 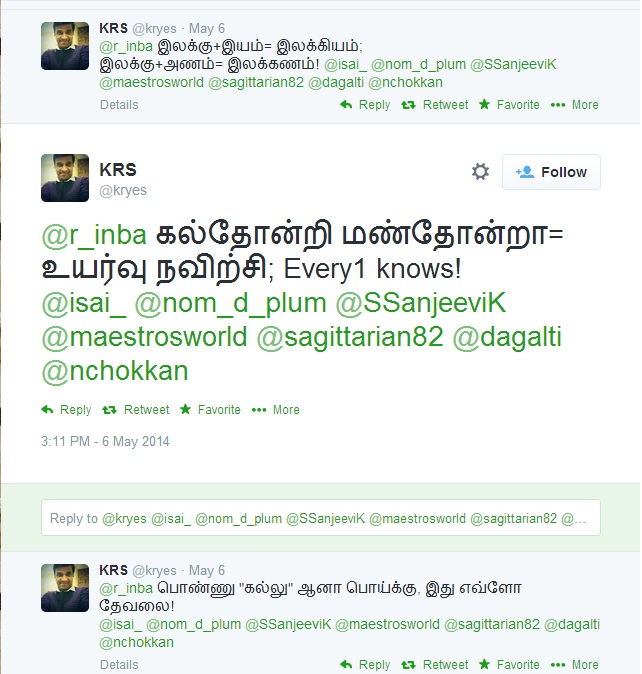 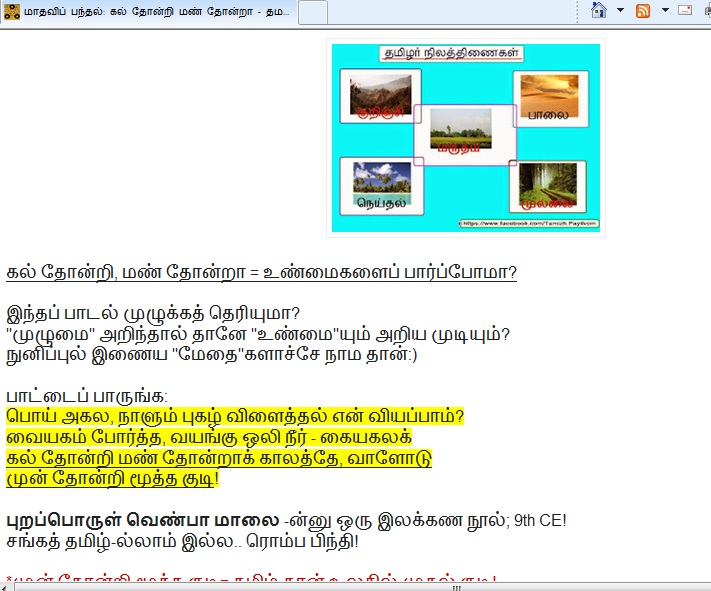 So one more thing to add to the list of plausible theories: it may have been sE, but misread as kE, because it was being interpreted in the 19th-20th century.

I tried looking for an image of the 2nd edict online but couldn’t find it.

For the sEraLam-kEraLam (or kEram / kELam to kEraLam

), this Ashoka edict may be an interesting archeological input...

If anyone has access to the photograph of that (i.e. seen the original and taken a pic OR have access to a book that has the photo and can scan/ load OR knows a link that actually has the image), please post

@r_inba ok hereby withdrawing the 'misreading' theory. Here it is in brahmi pic.twitter.com/KEIR6Povla

So, the "chE / sE to kE" is still open to all theories

Any kid who reads this forum (and the tfmpage / hub where I had >10000 posts) & this whole thread can understand the following:

1. This guy's anger at me is totally misguided / unnecessary & based on total ignorance about who I am and what I stand for.

3. This forum (IR and BEYOND) is OPEN to discussions and anyone can post here after a free registration, though posts are moderated. In any case, I'm neither the owner nor the admin here!

4. It's not a great practice to do personal attacks when it is the "karuththu" that is to be really countered (regardless of whatever tone one reads it, eLLal kiLLal and otherwise). If someone resorts to name-calling and not addressing the main questions, regardless of their PhD knowledge, such behaviour only manifests childishness and immaturity. Definitely I don't need bonafide from such people about my love for Thamizh!

Let's focus further on mozhi discussions and enlightenment and not kuzhAyadi stuff!

I mentioned in my opening post of this thread, about a friend / former co-worker :

He happened to visit the metro-Detroit area this week (his 8th grader child was part of a team that took part in an international "robotic design" competition in a MI university and the children won the top prize for best presentation while some Korean teams won for the actual design / model / demo etc).

I had the privilege of driving him & child to Niagara falls and the drive route is going around Lake Erie.

BTW, we're meeting after many years and this language thingy was far from my mind but somehow during the drive, the topic came up

We casually talked about the pronunciation of the name "Erie" and I said the local pronunciation is எரி...and added எரி (Erie) ஏரி (Thamizh for Lake)

That sparked off a many-minutes-long speech by him while I was driving, about a theory he happened to read on the net (with youtubes, demos etc and what not, he said he'll try to send me the links).

Theory is very simple - Thamizh was the ORIGINAL language of the earth, before others came into existence

While he agreed that some of the claims by these people are far-fetched, like the "Eli Eli" cry of Jesus while dying on stake was Thamizh, he was seriously agreeing to a number of other examples given by the research team that conducted a lot of studies with natives in some east African countries.

He said many examples of conversations of villagers in African countries with a lot of EXACT Thamizh words for the same things...However, the two that were really interesting to me were the country names that I've kept on the title of this post...

If someone visiting this forum knew about this research, please post the links...otherwise, I'll wait for him to send me some

Some similarity between indhi "ka" (क) and Thamizh "ka" (க)