There had been a few tweets by IRFs on the most recent youtube interview of GA to Chithra Lakshmanan (producer of the BR movie maN vAsanai and a PRO those days in the industry)...

I didn't have time to watch the youtubes (also alatchiyam - as usual uLaRal, why invest time for this fellow).

Then V_Sji sent IM and asked me what I think about these not-so-nice videos. Well, I decided to watch it anyways...

Here are the links, just in case anyone wants to watch them (not much interesting, many old recycles and some OttavAy uLaRals, as usual)...

app_engine wrote:There had been a few tweets by IRFs on the most recent youtube interview of GA to Chithra Lakshmanan (producer of the BR movie maN vAsanai and a PRO those days in the industry)...

I didn't have time to watch the youtubes (also alatchiyam - as usual uLaRal, why invest time for this fellow).

I've never read that entire thread and also misread it as Amara kaaviyam!  Never bothered to read it because somehow I don't have any good impression about GA even at times he used to be all over IR.

I just found something different today, maybe with a fresh set of eyes after a long gap in this forum.  I found the koo-kaa difference!  Hilarious!  He is the perfect example of how to fall from grace, the little that he had.  GA kept on flattering IR with his "sweet" (with hidden venom) words and then one fine day, back-stabbed him.  And he being touted as the humble brother who fell to conspiracy, is annoying and disgusting.  While the truth is IR is staying away from such venom-filled people in his life.  Good for IR - the man of steel.

And what happened to that Chitra Lakshmanan guy?  I thought he was a fan (or at least had some amount of respect for IR for doling out songs like those from Soora Samharam).  He chooses the week of IR birthday to interview this venomous brother and releases it in 2 parts.  Height of cheekiness and mean attitude.  They need NOT praise IR for his achievements but at least could refrain from such yellow-journalism.

BC wrote:
I've never read that entire thread and also misread it as Amara kaaviyam!  Never bothered to read it because somehow I don't have any good impression about GA

Prior to spotting those vinyl pictures in the now-defunct musicalaya website, me too never took him seriously as anything. (Notwithstanding my knowledge then that he wrote siRuponmaNi and poongathavE / directed karagAttakkAran etc - I thought those were very few and possibly he was helped by others surrounding the brothers).

However, after seeing those vinyls crediting him for so many iconic songs (putham pudhukkAlai / en iniya pon nilAvE / uRavugaL thodarkadhai / ooru sanam / dEvanin kOyil moodiya nEram / then pANdiththamizhE etc.) I looked at him quite seriously as a lyricist and decided to post 100 great songs that had lines (at least partly, even if IR had his hand in the pallavi lines)...

So, I did complete that exercise sincerely in this thread, even when he didn't have much internet presence! Now, he is there everywhere (even joined a political party, wrote their story in nakkeeran magazine - which had most of these episodes told in this interview).

Just trying to be balanced - giving him some credit for where he did good - but always getting irritated that he does not treat his brother with due respect & gratitude.

Agreed.  I love his lyrics, his movie Karagaatakkaaran and all that.  But my life lesson itself is to stay away from people who flatter you too much, because they are the ones waiting to dig a hole for you.

What he did as IR's own brother is unpardonable.  Instead of talking about himself and what he did, he STILL needs a walking-cane called IR, this time to slam him and gain some attention with that.  He did not stop with one instance or even two or three. He keeps on doing it like he is on a mission.  That is CHEAP and crass.  Sadly.

Had some time (forced rest due to a viral infection)...spent some time browsing around.

As one can see, after starting his about a year back, this guy was struggling to get views. (Most of his initial videos could not go beyond 2 / 3 digit # of views)...

So, he has now got into this "history kisu-kisu" business to boost his subscription.
(Looks like he has met with some success).

I asked him on twitter if he had the 200 film list claimed to be MD-ed by GA. He does not have and asked me to check year-by-year on wikipedia.


Just for fun, here's the link to his opinion a couple of years back - how harsh he was shouting should be seen to be believed :

Conclusion of the matter is, DON'T TAKE THIS MAN SERIOUSLY.

One more version of "Why Kamal didn't do the movie supposed to be directed by GA" - this account is by Kalaignanam :
https://www.youtube.com/watch?v=8jHQnXK1Bdc

As per this account, Kamal could not wait for GA to complete all his "foreign tour assignments" post karagAttakkAran success and thus went with a different project.

Also, per this account, IR had no hand one way or another (in recommending or otherwise GA to Kamal).

BTW, GA was blabbering that he went to UK because he was upset of loss of KH project, here this fellow says reverse

So, now, whose story is "Devar magan"?  I remember GA whining about it a few years ago and now this man.

This GA is annoying and hilarious at the same time.  He keeps switching back and forth on his words, changing colours like the proverbial chameleon.  I'm not buying his sudden transformation as Mr. Uthaman.

This thread is a primer on him (his achievements and his weirdo character).  Somebody ask him to read it!

Though I don't bother much about whose story is it anyway, that movie, to me, is a landmark in Cinema history, well executed in every aspect.

My ONLY qualm is that IR missed his National Award by 1 point losing to (you know what) that Rose movie.  Rose movie's MD won it thanks to the sympathy of none other than Balu Mahendra.  That makes it even more indigestible.


Just for fun, here's the link to his opinion a couple of years back - how harsh he was shouting should be seen to be believed :

Conclusion of the matter is, DON'T TAKE THIS MAN SERIOUSLY.
அம்புட்டுத்தான்!

He is planning for Karagaatakkaaran sequel with IR (on board?!), it seems!  So, what I thought was right, in deed.

All that "sudden" transformation mentioned in my previous comment is due to this.

Don't worry - it won't take off

I'm 200% sure about that!
(and I sincerely hope I won't be proved wrong

Two albums that (unfortunately) have the IR-GA music tag have got clarified yesterday - please go thru this thread:
https://twitter.com/_0sagi/status/1143353707976888320
(Don't worry about not being able to see the tweets of anadhai whom one has to follow to see - I don't and can't see what he says but mostly it does not matter).

One song by IR (iLankiLiyE innum viLangaliyE) - this had been already cleared up as the movie went into a limbo after TN Balu died. Later when KH directed the rest and finished the movie, IR was no longer available (or affordable) and they hired Amar to do the job. One song by IR got retained and his name also used in promotions.

The other was "Hello yAr pEsuRadhu" whose disk cover has both names as MDs.

However, once I had a chance to listen to the songs, I had no doubt that they didn't have anything to do with IR.

I said so in the thread and even posted my guess. Interestingly, the director of that movie was Ramarajan (yes our pasu nEsan only). His assistant confirmed my guess 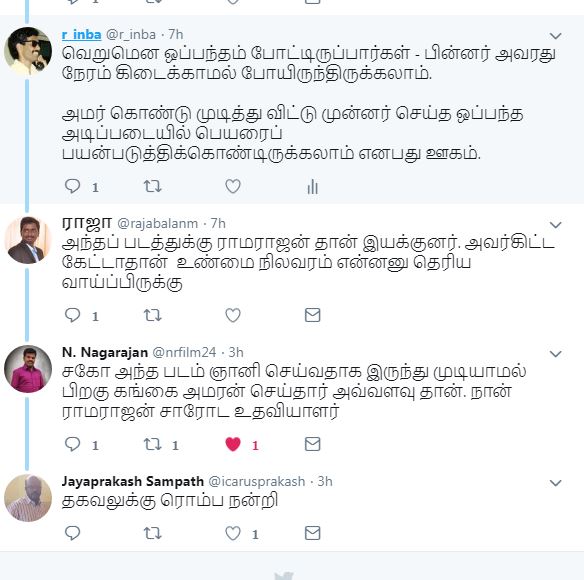 So, there had been never any 'IR-GA' music. Yes, there was 'MSV-IR' music and that was the only "collaboration" that IR had in MD-ing. (Besides doing udhavi to R Govardhanam for varaprasAdam / got credited in the titles. And IR did just one song and possibly BGM for his portion of the movie 'kaNNil theriyum kadhaigaL' that had 5 MD's - no collaboration there but apportioning, the MDs probably played a "benefit match" for the producer, singer A L Raghavan)

I had seen the film Hello Yaar Pesuradhu... It was a suspense thriller from Ramarajan.. The BGM was certainly of top-notch and I assume IR did it..

raagakann wrote:The BGM was certainly of top-notch and I assume IR did it..

Since a person from that unit confirmed IR didn't have bandwidth for the project, it must be a case of GA doing an unusually good job (or got the help of someone like Arunmozhi Napoleon, who reportedly did re-recording for few movies credited to IR).