Hi, Has Raja sir composed any song based on Sahana raagam.....

Easwar wrote:Hi, Has Raja sir composed any song based on Sahana raagam.....

As part of Ragamalika for a song that comes as a play on Harischandra in the film Thunai Irupaal Meenakshi, yes. Other than that, not aware.

^that explains KB's reluctance in working with Raaja

He did compose an entire BGM stretch in Sahana as Kamal/Chiru leave home in UMT/Rudraveena. And boy, it does engulf you there. I do hear IR chats with the directors before composing and gets to know their likes and dislikes and could have got it from KB himself that he is fond of Sahana.

thank u all fr the info.Am listening to poo poothadhu from mumbai express movie, and feel that this style of composition is more like nepv, megha.is tis also played by hungary musicians.. and would like to know which form of music it is.. thanks in advance for ur replies...

Easwar wrote:thank u all fr the info.Am listening to poo poothadhu from mumbai express movie, and feel that this style of composition is more like nepv, megha.is tis also played by hungary musicians.. and would like to know which form of music it is.. thanks in advance for ur replies...

AFAIK, it is not Hungary.  But I have heard that Sivamani worked with IR on this album (and would go on to perform in the 2005 show which was telecast on Jaya TV).   That elevated the quality of percussion work in the album.  Not to say the percussion work in the 80s albums was lacking, but maybe because of 21st century crystal clear recordings, you hear high quality drums both in terms of tone and performance on all those three albums.  There are more similarities between Megha and Mumbai Express in that both have one out and out jazz track, Kalvane and Kurangu Kaiyil, respectively.   NEPV is sort of all over the map and harder to pin down to one category.  However, all three have very Westernised vocal melodies for the most part so that might make the three albums sound as if in the same style.

As an aside have you heard the Mumbai Express BGM? Raja's jazziest ever offering IMO.

I haven't.  Meant to see the movie at the time of its release but the bad reviews discouraged me.  Will check out that clip later.

crimson king wrote:I haven't.  Meant to see the movie at the time of its release but the bad reviews discouraged me.  Will check out that clip later.

Film is Tamil cinema's best comedy of the noughties IMNSHO

Immensely worth a watch. Raaja is terrific too.

Wow, maybe I should see it sometime then.

I have heard this before.  I think it was also on the soundtrack as an instrumental track?

Possible. I don't have the album. Just came across this a few days back on youtube...

Ravi,
I believe Paasa PaRavaigaL was released in 1988. It has only three songs only as far as I know. then paandi thamizhE (happy and pathos versions) and maappiLLai maappiLLai maNaangkatti thOppilE.
_________________
Art is a lie that makes us realize the truth - Pablo Picasso

Please clear that long-outstanding one sir!
(Even the cassette covers and such have not proved useful for that number)

Amaran. Without a doubt. I'll change my mind only if I hear otherwise from Saravanan, not Raaja himself

Well, the song lost a small opportunity to get featured in the GA thread where I limited to ONLY 100 numbers of him :
https://ilayaraja.forumms.net/t80-gangai-amaran-thread-for-song100

(It's a personal favourite)

Chokkan sir finds it difficult to accept that GA did pOvOmA, when I posted in twitter

My reply to his doubttu :

Not sure if AGI music can be trusted completely, but they agree that it is GA :
http://t.co/HfLYGlP5hW 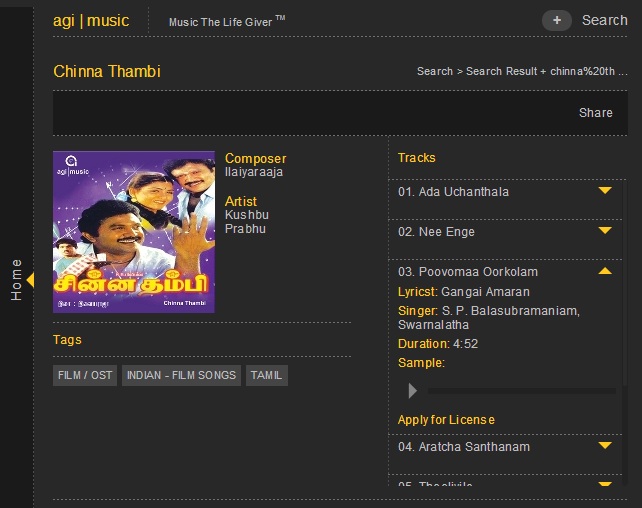 Chokkan sir & others are still busy in twitter on this question

Most seem to agree now that it wasn't Vaali who wrote it.

The latest doubt is "what song IR wrote in chinnathambi" (his name is in movie titles among pAdalAsiriyarkaL)...

Gangai Amaran was a multi-talented fellow without any single-minded focus though and somehow his limited even if noteworthy contributions in music always ends up being credited to someone else, poor guy. I read an account where MS Subbulakshmi had praised Raja that she listens only to his song every day in the morning after waking up. When Raja asked her what song it was, she said it was the "malar pola malargindra" song on Pondicherry Mother. Raja had to correct her and tell her that it was actually his brother who composed that.  I am sure in the lyrics department also songs like Uravugal thodarkathai and so on have been wrongly attributed to Kannadaasan or Vairamuthu, just like how Neela vaana Odayil's score was wrongly credited to his brother by a lot of folks.