Thanks Nerd and grouch.

grouch,
He is my eye-opener.

Though it is late , saw 3 nice movies in row 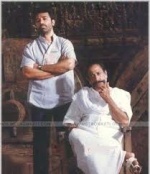 Even a layman would dismiss me with a single line as "Rahman show is everything what Raja's show is not" . Yet, I cannot help observe certain obvious difference like the "YouthO youth only " formidable presence and the conspicuous absence of pamily audience , by pamily, I mean the middle aged couple with their teen aged kids which was present in large numbers during Raja's show that happened precisely the same time during Dec 2011 at Chennai. Raja's dias wore a festive look with an ensemble of musical instruments like you name it , you see it in hordes, where as, Rahman's dias resembled a rock show with minimal electronic instruments, few guit'srs, violins, drums , a flautist. Rahman used a very sophisticated "keyboard" like player from which all kinds of sounds emnated. What is that called? The youthu audience's behaviour was in stark contrast to the predominantly perusus of Raja's where they were mostly restrained and only applauded at all deserving high points. The youthu crowd were given a free hand unlike in Raja's case and they were displaying all the "affected" behaviour of a western hard rock show, dancing, swaying, singing along aloud, hooting. Majority of the key singers were also youthu, Benny Dial, Chinmayee, Alphonso, Karthik, Naresh Iyer with few exceptions like Mano, Hariharan, Chitra. SPB was a notable absentee. Raja's show had legends like Balamuralikrishna, KJY, SPB along with new kids on the block. Rahman's cutting down on his assignment showed in his looks as he looked fresh, dashing with a Versace designer wear . Go I even need to compare with our man's simple dhothi clad presence?

Same thoughts-nga. Actually only about 20% of the songs were 'played'. ellaamE orE maadhiri dance beats.

That instrument has an 'imaginative' name - keytar

Also that harpeji wasnt tuned propery or something. So heavy on bass.

Madhubanakadai - Nice movie with powerful dialogues, especially in the climax.

^ Yes. My favorite side character was Bugs' friend who comes to the hospital to explain about the oblangata. Terrific casting.

Nerd wrote:^ Yes. My favorite side character was Bugs' friend who comes to the hospital to explain about the oblangata. Terrific casting.

i have friend exactly like that drunken madhan sir...

Haha... For me it was Bugs. en friend-Oda maama, akka purushan. Obviously a little older than us but ALWAYS used to hang around with us. naanga vaada podanu pEsumbOdhu avarai mattum vaanga pongannu exactly like how Bugs was seen amongst this group.

gilli (100 percent torture...actually even sildrens could not handle it and some back seat perusus switched off after the arrival of Prakash Raj)

Went there to check the title credits for lyrics. (musicalaya vinyl cover says GA wrote 'panneer pushpangaLE' but some websites credit that song to Suratha. The movie title credits do not mention Suratha at all - only GA & Kavingar).

Ended up watching many scenes

What lovely dialogs! All three (Sripriya / Kamal / Rajini) did a wonderful job in this movie! While KH-SP are very serious (ofcourse KH brand humor is thrown here and there), Rajini provided terrific humor!

Portions are worthy of repeat watches!

Not as hillarious as expected, but definitely very entertaining. Works well like a thriller. Good job all around.
_________________
Chronicles of Nevin:. Year One

NINAITHALE INIKKUM
- watched it after very long time
- didn't get that story was a flashback until the film ends
- KB deserves :clap: for some of his trade mark dialogues (KB or Sujatha?)..
- sample.. JP: neenga eppa vandheenga..
some villain kind of character: nee un bra'vukku kokki podumpodhe vandhutten..
these kind of dialogues are much more in the other film i saw..
- major -ve of the film is .. confusion around jayaprada's character & a -ve ending for both Kamal & Rajini
- some interesting points..
* SV Sekar's debut
* asst director SV Venkataraman.. is this SV Sekar's father?
* Sarathbabu comes in one scene